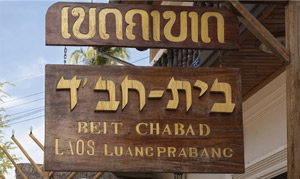 (JTA) — Anti-Semitic slogans were scrawled on the fence of a Jewish cultural center in the Russian village of Lyubavichi, the cradle of the Chabad Chasidic movement.

The inscriptions, reading “Jews out of Russia, our land” and featuring the Baltic variant of the swastika, were spray-painted on the wall of the Hatzer Raboteinu Nesieinu Belubavitch recently and  only recently  reported in the Russian-language media, the news site Cursor reported.

Police are looking for suspects, according to Gavriel Gordon, a Chabad rabbi who is trying to preserve the movement’s heritage sites in what used to be its center over a century ago.

Situated near Smolensk and the border with Belarus, Lyubavichi became a major Jewish hub following the settling there in 1813 of Rabbi Dovber Schneuri, a leader of the Chabad movement of Orthodox Jews. Chabad is the acronym of the Hebrew-language words for wisdom, intelligence and knowledge.

The movement, perhaps best known for its outreach to non-Chasidic Jews, also refers to itself as Chabad-Lubavitch in reference to how the town’s name is pronounced in Yiddish.

By 1857, Lyubavichi was a large Jewish town, or shtetl, with 2,500 residents. But most left during the Communist Revolution of 1917. Those who remained were murdered in the Holocaust.

The vandalism occurred amid preparations for a major international event in Lyubavichi. The European Jewish Cemeteries Initiative and Chabad plan to unveil the new fencing and preservation project at the Jewish cemetery, where several Chabad sages are buried. Joseph Popack, a Jewish-American donor, funded the new fencing.

Established in 2015, the cemetery initiative has preserved and built fences in more than 100 Jewish cemeteries in seven countries in Central and Eastern Europe, mostly in the towns and villages whose centuries-old Jewish communities were destroyed in the Holocaust.

Separately, graffiti reading “death to Jews” were sprayed for the second time this year in Odessa, Ukraine, Eduard Dolinsky, director of the Ukrainian Jewish Committee, wrote recently on Facebook, adding pictures of the graffiti. Following his post, Facebook suspended his account for 30 days for sharing anti-Semitic content, he reported the following day on Twitter.