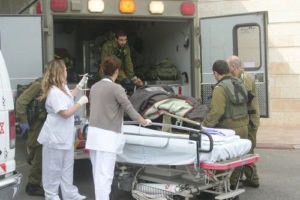 BY ADAM ABRAMS/JNS.ORG – Unprecedented footage broadcast on Israeli television Sunday, Nov. 19, revealed Syrian women and children crossing into Israel for medical treatment with assistance from the Israel Defense Force (IDF), in the latest showcasing of the Jewish state’s humanitarian aid to its war-torn neighbor.

The scope of the IDF’s “Operation Good Neighbor” mission had been revealed for the first time in July. The operation was initiated several years ago as an ad-hoc measure to treat Syrians who came to the border asking for help from Israel. The effort developed into an expanded program in June 2016 as humanitarian needs continued to grow.

Good Neighbors
“Our goal is to provide security and create good neighborly relations for people on both sides of the border,” Lt. Col. E (full name withheld for security reasons), the commander of Operation Good Neighbor, told JNS.org. “We will continue to do so in the best and most efficient way possible.”

According to the IDF, the operation has provided medical treatment to more than 4,000 Syrians, including hundreds of children. The military has transferred more than 119,000 gallons of heating and cooking fuel as well as 40 tons of flour, 225 tons of food, 12,000 packages of baby formula, 1,800 packages of diapers, 12 tons of shoes and 55 tons of cold weather clothing.

Additionally, the IDF is facilitating the construction of two clinics within Syria that will be run by local residents and NGOs to support some 80,000 Syrians living near Israel’s border in the Golan Heights region. Another clinic is being constructed on an IDF outpost on the Israeli side of the border.

Above The Fray?
Assaf Orion, a senior research fellow at Israel’s Institute for National Security Studies, explained that since the start of the Syrian Civil War, Israel has been “wise to avoid being drawn into the quagmire, its policy focusing on safeguarding well-defined red lines” on issues such as cross-border attacks and weapons transfers to terrorist organizations like Hezbollah. Yet when Syrian President Bashar al-Assad’s regime “attacked the Syrian populace, besieged its towns, starved them, and deprived them of water, electricity and medical services, Israel chose to reach out to communities across its borders,” he said.

“This humanitarian approach, being morally right on its own virtue, has other and real effects, both in changing perceptions of Israel among its closest neighbors in Syria, and by the fact that no attacks on Israel ever came from the areas held by these communities, unlike from regime-held sectors,” Orion, the former head of the Strategic Division in the IDF General Staff’s Planning Directorate, told JNS.org.

“I Wish We Could Stay Here For Good”
A recent media segment highlighting the IDF operation aired on Israel’s Hadashot News, and included interviews with Syrian women who expressed deep gratitude to Israel for its humanitarian assistance amid the ongoing Syrian Civil War.

According to the Hadashot report, 21 Syrian mothers and 23 children crossed into Israel seeking medical treatment during the night that the segment was filmed.

Anonymous Voices
“It has become commonplace” for Syrian civilians to seek medical treatment from Israel, a Syrian mother told the television network’s reporter. “Everyone wants to come here. Adults too, not just the children.”

“This must be very strange for them,” IDF officer Gil Giladi said on the broadcast. “They’re dealing with ‘the enemy.’”

Another Syrian mother stated, “Israel was thought of as the enemy…Now that you are helping us, most [Syrians in the Golan Heights] are with you. They love Israel. They see the true face…the reality.”

When the Hadashot reporter asked for clarification regarding who Syrians view as the enemy, a Syrian woman said, “All of them: Islamic State, Hezbollah, Bashar [Assad]. They’re all the same.”

The Syrians who were interviewed remained anonymous due to fears of reprisal for seeking out aid from the Jewish state.

“They execute people next to the mosque,” said a Syrian woman from a province controlled by the Islamic State terror group.

“I wish we could stay here for good,” said another.

Increased Tension
Israel and Syria have no diplomatic relations. Although the countries maintain a fragile truce agreement established in 1974, they essentially remain in an ongoing state of war, with cross-border exchanges of fire becoming more frequent in recent years.

The latest revelation of Israeli medical aid for Syrian civilians came amid increased tension along Israel’s northern border with Syria. Recently, an IDF tank fired a “warning shot” across the border in response to the Syrian military constructing an outpost in the demilitarized zone of the Golan Heights, in direct violation of the 1974 truce’s prohibition on heavy construction tools or military vehicles in that area.