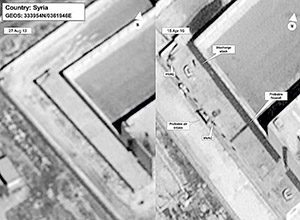 NEW YORK CITY (JTA) — The head of the Anti-Defamation League drew parallels between Syria’s alleged use of a crematorium to dispose of bodies to actions committed by the Nazis during the Holocaust.

Jonathan Greenblatt, the group’s national director, also called on the international community, including Russia, to take action to stop the violence perpetuated by the Syrian government under the leadership of President Bashar Assad.

“As Jews, we are particularly shocked by the extreme brutality of the Syrian regime, which invokes the worst nightmares of Nazi atrocities against the Jewish people,” Greenblatt said Tuesday, May 16, in a statement. “The world learned from the twentieth century that it did not do enough to stop the crimes of the Nazis which led to the genocide of six million Jews.

“The nations of the world — including first and foremost Russia, which continues to aid and abet Assad’s brutality — must act to put an end to the inhumane actions of the Syrian government.”

On Monday, the United States said that it believes the Syrian government built a crematorium to cover up the killing of as many as 50 detainees a day at a prison north of Damascus.

”Although the regime’s many atrocities are well-documented, we believe the building of a crematorium is an effort to cover up the extent of mass atrocities taking place in Saydnaya prison,” said Stuart Jones, acting assistant secretary for the State Department’s Bureau of Near Eastern Affairs, according to CNN.

Jones added: “We are appalled by the atrocities taking place in Syria” with the “seemingly unconditional support of Russia.”