Talmud study is mostly a boys’ club. This Orthodox woman wants to change that. 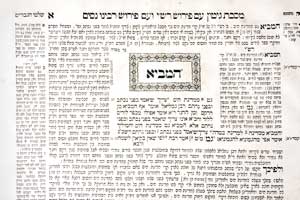 By BEN SALES
NEW YORK CITY (JTA) – Michelle Farber has spent decades teaching Talmud to Jewish women. But when her first child was born, she was relieved it was a boy.

“When my son was born, I said, ‘Good, we had a boy first, it’ll give the world a little time to catch up for women,’” Farber said. “Well, my daughter was born a year and a half later. I really thought that by the time my kids got to my age things would be totally different, and I feel like there’s still not a large number of women who dedicate time to study Talmud.”

Daf Yomi For Women
Farber, 47, is one of the people trying to change that.

For the past 7 1/2 years, she has taught a page of Talmud a day to a small group of women at her home in the Tel Aviv suburb of Raanana. Some 250 more listen to the class online.

The classes are part of a worldwide program called Daf Yomi in which countless numbers of Jews around the world — nearly all of them men — study one of the 2,711 pages of the millennia-old Jewish legal code known as the Talmud each day. On Jan. 4, the 7 1/2-year Daf Yomi cycle is set to finish, an occasion that will be marked by massive celebrations. In 2012, a crowd of 90,000, mostly males, filled MetLife Stadium in New Jersey to celebrate the end of the last cycle.

Women To Celebrate Cycle
On Jan. 5, Farber is holding the first large-scale Daf Yomi ceremony for women at the Binyanei Ha’Uma convention center in Jerusalem. Thousands are expected to attend, and the event will be livestreamed around the world. The ceremony is a project of Hadran, an organization founded by Farber to encourage women’s Talmud study.

The event will celebrate a years-long accomplishment, but Farber also hopes it will encourage more women to engage in intensive Jewish text study — a field that has been dominated by men for centuries.

“This is a real opportunity to make a change and get to all the women who are out there who aren’t necessarily studying now and could be,” she said. “It’s a very good thing to do at a stage of life where you’re busy with a million things and want to set aside some time for learning and feel like you’re getting somewhere.”

Farber’s life is a case study in the obstacles that Orthodox women have faced in trying to study Talmud at the highest levels. The Long Island, native left Barnard College in the middle of her studies to study Torah in Israel, eventually getting her bachelor’s degree in Talmud and Bible from Bar-Ilan University near Tel Aviv. She also graduated from the scholars’ program at Midreshet Lindenbaum, a women’s seminary in Jerusalem.

Coed Class
At that stage, a man with Farber’s knowledge could have pursued rabbinical studies. But at the time, that option was all but closed to Orthodox women.

So Farber studied independently. She joined a coed Talmud class with a distinguished Orthodox rabbi, but had to leave after it shut its doors to women. Ultimately she embarked on a career teaching Jewish studies to women in Jerusalem before moving to the Tel Aviv area, where she taught a weekly Talmud class to women.

Gender Gap Continues
“The opportunities for me were really lacking,” said Farber, who uses the title rabbanit. “You can’t imagine what it’s like. A guy has no understanding of what it’s like to be a woman and where the women are coming from and the lack that they have.”

Rabbinic ordination has been open to non-Orthodox women for decades. Opportunities have expanded recently for Orthodox women as well. Yeshivat Maharat in New York City has been training Orthodox women clergy for a decade, though it does not confer the title rabbi on its graduates. In Israel, some women have received Orthodox rabbinical ordination.

But Farber notes that there is still a significant gender gap when it comes to advanced Jewish study. An Israeli survey from 2016 showed that 41 percent of religious Zionist women in Israel do not study Torah regularly, as opposed to just 14 percent of men. Part of the reason why Farber’s class is limited to women is so women have a safe space to start encountering texts.

“I knew that women may be intimidated to come if there were men in the room,” Farber said. “It was a way to attract beginners who had less background. If you put them in a class with men, they’re going to be more hesitant to open their mouths, to feel comfortable, and I wanted a warm, safe environment for women.”

Women May Have Insights
Farber’s teaching style emphasizes giving students a clear explanation of the Talmud’s esoteric and tortuous legal debates. But she also aims to show how the Talmud confronts questions of human nature — something she has found her female students approach with particular insight.

She recalled one Talmud scenario in which a woman receives a date rather than a ring to signify marriage — and then eats the fruit. Is the marriage still valid? It sounds like a bizarre case, but one of her students suggested that the bride might just be poor and hungry.

One of Farber’s regular students via podcast, Ilana Kurshan, said she appreciates that Farber uses women’s names when discussing hypothetical legal cases. Kurshan has completed Daf Yomi and wrote an award-winning memoir on the experience called If All the Seas Were Ink.

“You imagine in your head that the women are the actors in the drama,” Kurshan said. “There are many aspects both of the text itself and the human encounter with the text that we have not historically had access to because only half the population has been studying the texts.”

In advance of the completion ceremony, Farber has begun a campaign to have women “adopt” one page of Talmud and then study it before the event. She also wants to help train more women to teach Talmud.

“It’s not just that women should study Talmud but that we create more women scholars,” she said. “Having a woman teacher provides a role model. It just sends a message that you can get somewhere in this field.”

Want to study Daf Yomi? Sign up for My Jewish Learning’s free e-mail series exploring insights from each page of the Talmud. E-mails begin Jan. 5, 2020.