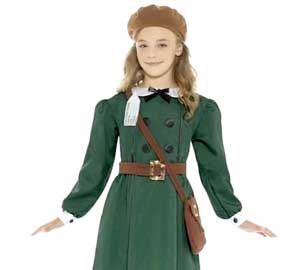 By JACKSON RICHMAN
(JNS) – A costume that appears to look like an outfit worn by the young Jewish diarist Anne Frank during World War II and the Holocaust has been removed from Target’s website, a spokesperson for the retailer told JNS on Tuesday, Sept. 1.

“I can confirm that as of this afternoon, that costume has been pulled and is no longer on Target.com,” said the spokesperson.

The item description read, “Is your child studying World War II or the Holocaust? Now you can help her transport back in time to the 1940s. They say that dressing up can be an important learning technique and this WW2 Girl costume for kids will be the perfect learning tool.”

Retailers have previously been censured for selling World War II and Holocaust-inspired clothing, and other merchandise. The clothing in this particular case had no yellow star that was worn to designate Jews throughout Europe.

On Aug. 4, 1944, after 25 months in hiding in Amsterdam, Frank and her older sister, Margot, were rounded up and sent to the Bergen-Belsen concentration camp in Germany. In February 1945, they died of typhus.

Only the girls’ father, Otto Frank, survived after being liberated from Auschwitz by Soviet troops on Jan. 27, 1945.