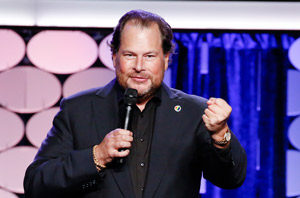 NEW YORK CITY (JTA) — Tech executive Marc Benioff began a week in which he and his wife Lynne announced plans to buy Time magazine by blowing the shofar at his San Francisco synagogue.

Benioff sounded the ram’s horn during Rosh Hashanah services at Congregation Emanu-El, a 168-year-old Reform temple. The New York Times reported that Benioff, backed by a guitarist, blew a long, curved shofar before heading with other congregants to a nearby beach to take part in tashlich, the annual casting away of sins.

Benioff and his wife announced recently that he was buying the fabled news magazine for $190 million.

Benioff, 54, is the CEO of SalesForce, a cloud computing company with a popular customer relationship management system, or CRM. he posted on Twitter that he is proud to “steward” the iconic newsweekly.

“The power of Time has always been in its unique storytelling of the people & issues that affect us all & connect us all,” he tweeted. “A treasure trove of our history & culture. We have deep respect for their organization & honored to be stewards of this iconic brand.”