Tel Aviv beaches found to be among most plastic-polluted 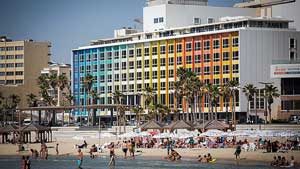 (JNS) – Israel was featured in a report by the World Wildlife Fund recently as home to the third most plastic-polluted shoreline in the Mediterranean, according to a report by Ynet. The Tel Aviv coast ranked behind Turkey’s Cilicia beaches and those along the coast of Barcelona, Spain.

Not all Mediterranean coastal cities were included in the investigation.

According to WWF, 46 pounds of plastic waste wash up every day along a single kilometer of Tel Aviv beach.

All in all, the amount of plastic dumped into the sea equals approximately 33,800 plastic bottles’ worth every minute.

Egypt was found to be the biggest plastic waste culprit in the region, followed by Turkey.