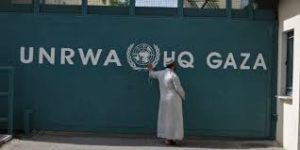 JERUSALEM (JTA) – Israel filed an official protest against Hamas at the United Nations Security Council after a terrorist tunnel was discovered under two U.N. schools in Gaza.

The tunnel, first reported on Friday, June 9, was discovered by workers for the United Nations Relief and Works Agency for Palestine Refugees in the Near East, or UNRWA, on June 1.

Israel called on the Security Council to condemn Hamas and to include Hamas on its list of designated terror organizations. Both Israel and the United States recognize Hamas as a terror organization. Hamas took control of the Gaza Strip 10 years ago.

Hamas has denied building the tunnel and said it asked other terror groups in the area if they were responsible. The other groups also denied creating the tunnel.

UNRWA “condemns the existence of such tunnels in the strongest possible terms,” agency spokesman Christopher Gunness said. “It is unacceptable that students and staff are placed at risk in such a way.”

Gunness added that the tunnel “has no entry or exit points on the premises, nor is it connected to the schools or other buildings in any way.”

UNRWA will seal the tunnel. School is out for the summer.

Hamas has  previously built tunnels under Gaza into Israel and Egypt to be used to smuggle food and water, as well as to kidnap Israeli soldiers into Gaza.

At the start of the weekly Cabinet meeting on Sunday, Israeli Prime Minister Benjamin Netanyahu called the tunnel a “war crime.”

”Hamas is using schoolchildren as human shields and this is the enemy that we have been fighting against for many years, an enemy that is committing a twofold war crime,” he said. “On the one hand, it first attacks innocent civilians and then hides behind children.”