The Arava continues to produce new discoveries in the desert 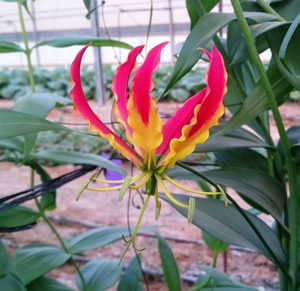 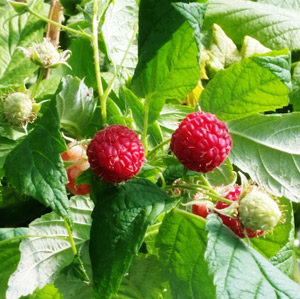 These photos were taken during the  recent Arava Open Day Agricultural Exhibition. Below is the Desert Raspberry and above the Flame Lily, both now successfully grown in Israel’s Arava.

By TANIA PONS-ALLON
In its 117-year history, Jewish National Fund (JNF-USA) has not only turned barren, unsown lands into forests and green hills, it also offers the people of Israel the opportunity to forge a lasting connection to the land by planting a tree and laying new roots in the rich soil of this still young nation.

In the Central Arava, located in southern Israel along the Jordanian border and spanning between the Dead Sea and Eilat, one would be hard-pressed to find the vast pine and oak forests commonly seen across Central and Northern Israel. In this region, hothouses are plentiful, scattered between the ridges and valleys, and it is in those structures that the sweetest fruits and vegetables grow thanks to the advanced techniques and high-tech methods available and being developed.

Challenges Produce Innovation
The Arava’s climate is not a hospitable one—it’s dry, receives less than one-inch of rainfall a year, has extreme climate, brackish water, and vast barren land. Yet, a group of pioneers in the 1950s set out to settle the Arava to establish their agricultural dreams—with Jewish National Fund backing. Since those first days, JNF-USA has worked to transform the Arava’s arid, desolate soil into fertile gardens through research and development, and the hothouses and fields of the area true testament to JNF-USA’s “green thumb.”

It is often said that the greatest creations are made when there are strict boundaries or challenges. This certainly holds true for the Central Arava, where despite restrictions and difficulties, farmers and researchers have managed to cultivate and adapt fruits and vegetables to the desert’s habitat, and even introduced new crops to local farmers.

Some of these innovative crops were on display at the recent Arava Open Day, an annual agricultural event and the largest agricultural exhibition in Israel, hosted in the community of Hatzeva.

New Crops
Throughout the exhibition, scientists from the Central Arava Research & Development Center showcased some of the latest innovative produce to the public, such as:

These ‘alternative’ crops are expanding the variety of produce Arava farmers can grow, and as the agricultural market is constantly shifting and becoming increasingly unpredictable, it is the R&D researchers that continue exploring new crops that may further develop the Central Arava. JNF hopes to make it an oasis in the desert.

Israeli Prime Minister David Ben-Gurion once said, “It is in the Negev that the creativity and the pioneering vigor of Israel shall be tested.” In the Central Arava, “pioneering” is a flexible concept, and Ben-Gurion’s vision is realized with every fruit or vegetable sprouting up through this desert’s sands. The future of Israel is already happening—it’s in the Arava and Jewish National Fund is helping to achieve it.

Tania Pons-Allon lives in the Central Arava. Her husband Yoav Allon, a second-generation farmer from Moshav Hatzeva, previously worked as a financial analyst for a water company, but is now a full-time farmer in the Arava desert. She works in the research development department of the Central Arava Regional Council, a part of Jewish National Fund’s Blueprint Negev campaign. She will speak at  a Jewish National Fund’s Breakfast for Israel on Monday, May 20, at the Albany Marriott. She will be joined by Annette Vacarro and Dana Sless, U.S. health care professionals and Arava volunteers. Information and registration for the program may be obtained from Rina Wagman, campaign executive, New England at rwagman@jnf.org or 617-423-0999, ext. 812.