The balance between personal liberty and the obligation to save lives 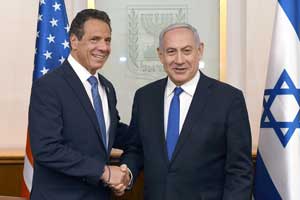 By JONATHAN S. TOBIN
(JNS) – What do Israeli Prime Minister Benjamin Netanyahu and New York State Gov. Andrew Cuomo have in common these days? The answer is that critics of these two very different political leaders are accusing them of overstepping their authority and infringing on individual rights while dealing with the coronavirus pandemic.

In Israel, some of Netanyahu’s left-wing opponents have accused him of acting like a dictator by ordering Israel’s police to use the smartphones of those who have been exposed to the coronavirus to track their whereabouts. The purpose of the measure is to ensure that those in quarantine don’t infect others, as well as to inform those who have been exposed to a person who has contracted the disease of their obligation to ensure that no one else gets it.

But those left-wingers who oppose Netanyahu’s policies on a host of other issues have seized upon this order to depict the prime minister as a would-be authoritarian employing the security establishment to use high-tech police state tactics.

Ironically, in the United States, it’s largely been conservatives who have employed the same kind of rhetoric to describe some of the decisions made by Cuomo in New York and leaders elsewhere to enforce the lockdown of various locales as governments struggle to contain the spread of the virus.

In particular, the National Rifle Association is suing Cuomo and New York for closing down shops that sell guns because they are deemed non-essential. They claim that this violates the Second Amendment rights of Americans, and that it compromises their ability to defend themselves during the pandemic. Some mega-churches elsewhere are making similar points about bans on holding public meetings which they allege violates their First Amendment rights of free assembly and freedom of religion that are not nullified by concerns about the spread of the COVID-19 virus.

Truth?
It’s easy to dismiss both Netanyahu’s critics and those seeking to defend the sale of firearms or holding mass prayer meetings as hopeless partisans and crackpots. Yet regardless of your feelings about Netanyahu, guns or mega-churches, in most circumstances, they’d be right.

The most essential purpose of any government should be to defend the rights of the individual against forces that would deprive them of liberty. The kind of measures that are being employed to enforce lockdowns of whole cities, states and nations are the antithesis of liberty and democracy. They involve the wholesale sacrifice of individual rights. Placing that much power in the hands of any government, even ones run by advocates of democracy—true of both Netanyahu and Cuomo, whether or not you agree with them on most issues—is a very scary business.

At such moments, libertarians like to quote Benjamin Franklin’s famous line that said: “Those who would give up essential liberty to purchase a little temporary safety deserve neither liberty nor safety.”

Rights Or Security?
That’s a powerful argument against government over reach of any kind and would seem especially relevant when discussing government efforts that to ensure public safety at the sacrifice of so much liberty.

But it’s important to point out that the actual context in which Franklin wrote goes against the usual interpretation since what he was advocating for was in favor of a legislature’s ability to tax people—in this case, the Penn family, the landlords of the entire colony of Pennsylvania in the 18th century—to provide for the common defense.

Nevertheless, the calculus by which one can trade rights for security is hard to discern. In many, if not most cases, the tradeoff isn’t worth it.

Endangering Others
But there are some cases when that doesn’t really work, the current emergency being living proof of that.

Suffice it to say that when the exercise of one’s right to act as you please—whether it is to buy a gun, attend a church service with a thousand other people or attend a minyan or wedding—if it can directly endangers the rights of others to life and liberty by potentially giving them the coronavirus.

That means that even if you consider yourself a First Amendment purist, you have to recognize that there are limits to the right to free speech. U.S. Supreme Court Justice Oliver Wendell Holmes’ famous admonition that “falsely shouting fire in a theater and causing panic” is not protected under the Constitution is an example of how common sense must be employed when discussing such issues.

Pikuach Nefesh
But in the case of the impact of coronavirus on our liberties, it is Jewish religious law that is the most persuasive. The principle of pikuach nefesh, literally “saving a soul,” enables the breaking of almost all Jewish laws (with a few clear exceptions, such as idol worship, unlawful sexual relations and murder) in order to save lives.

This principle cannot be twisted to support permanent tyranny or abridgement of rights and liberty. But it’s clear that it places the efforts of officials like Netanyahu and Cuomo to ensure that the coronavirus pandemic doesn’t turn into a public-health catastrophe with victims overwhelming medical facilities and leading to mass death.

More to the point, it obligates all of us to understand that giving up some of our liberty to congregate or to go about business as usual may well be the difference between life and death for those who are most vulnerable to the disease: the elderly and those who already managed respiratory illnesses or are immuno-compromised.

Until the pandemic subsides—as sooner or later it must—we need to put our lives and some of our liberty on hold not to purchase a little illusory security, but to preserve the precious lives of our elderly and others in peril. Those who employ arguments about individual rights to justify flouting the virus restrictions are not exercising liberty, but are instead unconscionably demanding the license to take human life.

He wanted to encapsulate Beijing’s Jewish community in a Passover Haggadah. The coronavirus complicated that.
With an eye on Iran: How will pandemic impact play out in the region?