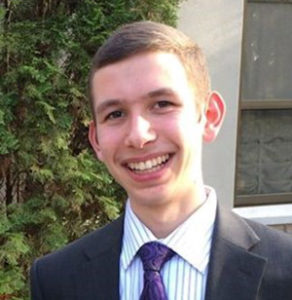 Medad Lytton, son of Rachel Anisfeld and Timothy Lytton, has been selected as one of the Bronfman Fellowship 32nd cohort of 11th grade high school students, Lytton is a senior at the Atlanta Jewish Academy in Georgia and a member of Young Israel of Toco Hills, formerly attended the Hebrew Academy of the Capital District in Albany through the eighth grade. Lytton plays jazz trumpet in Georgia State University’s Rialto Youth Jazz Orchestra and is  is the incoming editor-in-chief of his school newspaper.

The 26 Fellows, chosen  in a competitive application process from over 220 applicants across North America, will participate in a five-week program of study and travel in Israel, followed by a year of programming centered around pluralism, social responsibility and Jewish texts. They also interact with a group of Israeli peers who were chosen through a parallel selection process as part of the Israeli Fellowship, Amitei Bronfman.

The program was founded by the late Edgar M. Bronfman formerly CEO of the Seagram Company Ltd. and a Jewish philanthropist.

The 2018 Fellows are from 11 states and Canada and represent a range of Jewish backgrounds, including Chabad, Orthodox, Conservative, Reform, Reconstructionist and, secularly/culturally Jewish.

The Fellowship promotes the study of Jewish texts, traditions, history and culture as a way for Fellows to engage with each other and the world.

There are now over 1,200 Bronfman Fellowship alumni across North America and Israel. Among them are seven  Rhodes Scholars, four former Supreme Court clerks, 18 Fulbright Scholars, 32 Wexner Fellows and 24 Dorot Fellows. Leaders of note among Fellowship alumni include Daniel Handler, a.k.a. Lemony Snicket, author of the Series of Unfortunate Events children’s books; Jonathan Safran Foer, author of Here I Am:  A Novel, Everything Is Illuminated and Extremely Loud and Incredibly Close, and editor of the New American Haggadah and Rabbi Angela Warnick Buchdahl, the first woman to be named senior rabbi at New York’s Central Synagogue and the first Asian-American person to be ordained as a rabbi and cantor. Others include Igor Timofeyev, former Supreme Court clerk and former Special Advisor for Refugee and Asylum Affairs at the U.S. Department of Homeland Security; Dara Horn, author of A Guide for the Perplexed:  A Novel, In the Image, The World to Come; and Anya Kamenetz, lead education blogger at NPR and one of the youngest people ever nominated for a Pulitzer Prize for her Village Voice series “Generation Debt: The New Economics of Being Young,” and author of The Art of Screen Time: How Your Family Can Balance Digital Media and Real Life.

Information about The Bronfman Fellowship may be obtained at  www.bronfman.org.

Public corruption and other crimes! What punishment for Sheldon Silver?Judge to decide 7/13
Poll shows deep divide between Israeli and American Jews — on Trump