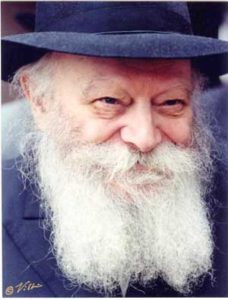 By DAVID SUISSA
(Jewish Journal via JNS) – We take it for granted that the way to address the evil of anti-Semitism is to fight it. It’s a natural part of our vocabulary. We fight, we confront, we condemn, we call out. We refuse to stand idly by. All of that makes perfect sense.

But on this 25th anniversary of the passing of the Lubavitcher rebbe—Rabbi Menachem Mendel Schneerson, leader of the Chabad-Lubavitch movement—it’s worth reflecting on his approach to fighting darkness. You never heard the rebbe call for protests or demonstrations. He never urged his followers to hit the streets to confront evil.

The Power Of Good Deeds
Instead, he urged them to hit the streets to spread goodness and kindness.

I have met hundreds of Chabad emissaries over the years. Whether I’m speaking with an emissary in Bakersfield, Puerto Rico, Prague, Morocco, Costa Rica or Oxnard, it’s always the same message, the same question: “Can I get you to do a good deed today?”

This kind of love can be disarming.

A few years ago, I was walking in Ben-Gurion Airport, feeling especially guilty that I was missing the first night of Chanukah, and thinking: Man, would I love to light a candle tonight. Of course, a Chabad emissary immediately appeared and asked me if I wanted to light. As grateful as I was for the opportunity, he looked even more grateful than I was.

If you want to understand Chabad and the power of the rebbe’s approach, multiply my story by a few million. Imagine thousands of emissaries in more than 80 countries spreading good deeds, day after day. It adds up to a lot of goodness.

It’s uncanny how any time you see a humanitarian disaster somewhere, there’s usually a Chabad emissary right in the middle of the rescue mission. It’s the Chabad way; they help out wherever they can, and these days they’re pretty much everywhere.

Fighting With Light
The rebbe was hardly naïve. He was a man of the world, a scholar and philosopher, fully aware of the dark side of human nature. Maybe he saw that there already were plenty of groups fighting the darkness of anti-Semitism through the standard methods of confrontation and condemnation.

His movement would go in another direction, a direction more in keeping with who he was. It would fight darkness with light, hate with love, despair with hope.

Chabad doesn’t much worry about standard metrics. Its key metric of success is: How many people have we helped today and how many good deeds have we enabled? Maybe that’s the way love works. It doesn’t calculate. It just gives. This kind of love can be disarming. It’s hard to hate anyone who only wants to spread acts of goodness, even if it’s not your religion.

That was one of the effects of the rebbe’s approach. By spreading the goodness of Judaism in such a visible, loving and global way, he showed the world a Judaism that is hard to hate.

His approach responded to the virus of anti-Semitism with the gentle but potent force of pro-Semitism.

For all of us who believe in the crucial importance of fighting evil though confrontation and condemnation, we owe the rebbe a debt of gratitude for adding to the world his method of love, goodness and kindness.

Whether it’s “working” or not, it’s hard to imagine our world without it.

This article first appeared in the Jewish Journal.

Alan Dershowitz helped Jeffrey Epstein secure his controversial plea deal. He has no regrets.
DC Report: Is McConnell a roadblock to democracy?