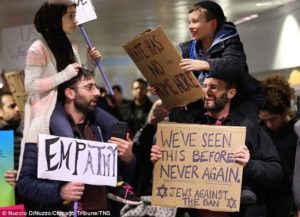 The Huffington Post
A Jordanian cleric visiting Canada recently misleadingly cited a hadith without context or explanation, which rightly triggered condemnations from the Muslim community as well as numerous headlines around the world. A hadith is an oral report transmitted from the Prophet Muhammad, and can be incredibly complex as one needs to evaluate all the chains of transmission of a particular statement recorded in a hadith in order to arrive at an appropriate conclusion of what the particular hadith is actually talking about. In this case, a single phrase was cited, one describing rocks and trees calling out to Muslims, “There is a Jew behind me, come and kill him.”

This is not the first time that this text has been used to foment anti-Semitic sentiment within the Muslim community. Muslim leaders and scholars must forcefully denounce such rhetoric and clarify Islam’s unequivocal condemnation of all forms of anti-semitism, racism, discrimination, and xenophobia. Of course, Islamophobes pounced on the opportunity to trigger alarm bells and generate a new wave of propaganda accusing Muslims of genocidal ambitions towards Jews, and to claim that Islam is inherently anti-Semitic and a threat to Western civilization.