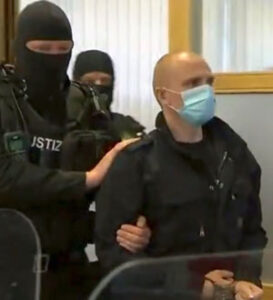 Stephan Balliet—the German neo-Nazi who mounted an armed attack on a synagogue in the city of Halle last Yom Kippur. Source: Screenshot

By BEN COHEN
(JNS) – At high school, he made no friends and didn’t belong to any clubs. He liked girls, but having a girlfriend was beyond his abilities. Academically, he was undistinguished, doing well in biology but failing in English. When it came to his free time, most of that was spent on the Internet. Once he graduated, he left home for a spell of military service. He lasted six months, dismissing the experience as “exhausting,” “stupid,” and “not a real army.” From there, he enrolled as a student in a local college, but he quit that, too, after, as he put it, “falling ill.”

A Failure Story
For the last five years, he had done nothing at all. The day that ended with his name and awful deed inscribed in headlines across the world began with him as an unknown 27-year-old, unemployed and living at home with a mother whose doting couldn’t quite quell the anger rising within him.

This is the portrait of Stephan Balliet—the German neo-Nazi who mounted an armed attack on a synagogue in the city of Halle last Yom Kippur—that has emerged from German media accounts of his trial, which recently began at the high court in Magdeburg.

Balliet’s act, which he live streamed over the Internet, shocked Germany and left its law-enforcement agencies heaving sighs of relief when it transpired that he failed to penetrate the synagogue’s heavy doors that stood between the 51 worshippers inside the sanctuary, and his bullets and grenades. But there was a death toll of innocents nonetheless: a 40-year-old female passerby who remonstrated with Balliet and a 20-year-old male customer at a Muslim-owned kebab restaurant targeted by Balliet after he sped away from the synagogue in his car. It is a macabre irony that neither of his victims was Jewish or Muslim.

As horrifying as this attack was to outside observers, by the standards Balliet set for himself—his stated purpose was to kill as many Jews as possible—it was a colossal failure. “Balliet speaks of himself like a loser,” noted the correspondent of Der Tagesspiegel on the trial’s second day. And indeed, much of the reporting bolstered that impression as the details of Balliet’s schooling, his home life, his record of anti-Semitic and racist utterances, and his conviction that “the Jews” were to blame for both Germany’s systemic failure and his own deadbeat existence were unveiled in the courtroom.

What Do We Learn?
But the proceedings also revealed another side to Balliet: haughty, cruel and utterly without regret or remorse. When the video of his outrage that he live streamed was replayed to the court, he grinned throughout like a Cheshire cat. When asked whether he would have slaughtered the children inside the synagogue had he managed to penetrate the sanctuary, he readily answered in the affirmative. And when given the opportunity to explain his act, he embraced it: What mattered, he said, was that other lone white men considering similar atrocities should take heart from the attention garnered by his attack, just as he had taken heart from the massacre a few months earlier at a mosque in Christchurch, New Zealand, by a white-supremacist shooter. (Not to mention the slaughter by another deranged lone-gun white supremacist at Pittsburgh’s Tree of Life*Or L’Simcha congregation in October 2018.)

One question that arises from Balliet’s trial is whether we will learn anything new about the intersection of political extremism with an individual’s personal crisis, or whether, as the reporting thus far suggests, much of what we already know is being confirmed. “I have questioned a hundred people on the reasons for their anti-Semitism,” wrote the French philosopher Jean-Paul Sartre in 1946, sharing some of the various answers he received. A “young painter” told Sartre that Jews encouraged insubordination among domestic servants because of their “critical habits.” A young woman told him that she had been continually cheated by furriers, all of whom were Jews. An actor insisted that he would have enjoyed a glittering career in the theater had the Jews not confined him to supporting roles. A former schoolmate complained that Jews were being favored by examiners, who deliberately gave them higher grades than non-Jews. And so it went on.

Similar prejudices about Jews persist today in America and Europe, alongside newer tropes about Zionism or Israel. However, not everyone who believes them will admit to doing so, and of those who do, very few are going to engage in the acts of deadly violence witnessed in Pittsburgh and in Halle. It is only on the basis of this last observation that faith in tolerance education—teaching our children from an early age that differences should not be cause for enmity among humans—becomes possible. But by the same token, we know that there are those, like Balliet, who reject these notions as a modern form of Jews poisoning wells, and who are perversely reinforced in their worldviews when they encounter Jews (or those they perceived as Jews) speaking about the Holocaust, or the evils of racism, or the difficulties faced by immigrants in their host societies. No conventional form of education is going to work in these cases.

Security Efforts Needed
If we have learned anything from Balliet’s trial so far, it is that we should assume that such attacks are always a possibility, in good times and in bad, and that our resources are best invested in preventing them. When it came to the synagogue in Halle on Yom Kippur last year, that challenge was as basic as stationing a police car outside the building—a measure that was, incredibly, not taken by the authorities in that city, despite the fact that it was Judaism’s holiest, and therefore busiest, day. The analysis of the lonely pathology that Balliet represents will continue, as it must, but it has taken more than enough lives already.