The Maccabeats to be featured at opening ceremonies for Capital Region Maccabi Games; you can still be involved! 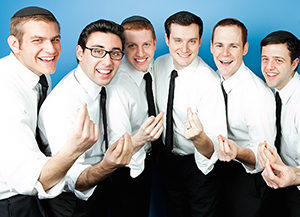 ALBANY–The Maccabeats, a Jewish music and a cappella group will be the headliner act at the opening ceremonies for the 2017 Capital Region Maccabi Games. Opening ceremonies are set for  the Times Union Center at 7 p.m. on Sunday, Aug. 6.  The Maccabi Games will be Aug. 6-11. The Maccabi Games is an Olympic-style sporting competition for Jewish youth from around the world. It is being held locally, one of three locations, for the first time. The games are the second largest organized sports program for Jewish teens in the world. The Sidney Albert Albany Jewish Community Center and the Robert and Dorothy Ludwig JCC of Schenectady jointly brought the games to this region.

Originally formed in 2007 as Yeshiva University’s student vocal group, the Maccabeats have a fan base, which includes 10 million views on YouTube. The Maccabeats’ ideology and identity play an important part in what they do. Strongly committed to the philosophy of Torah u-Madda, the integration of traditional Jewish and secular knowledge, the Maccabeats perform an eclectic array of Jewish, American, and Israeli songs. According to some, the group’s piece, Lecha Dodi, is the epitome of this synthesis, combining beloved words of Jewish liturgy with Leonard Cohen’s melodic Hallelujah music.

This summer, the games will be held in three U.S. locations: Miami, Fla., Birmingham, Ala. and in this area. Approximately 700 teen athletes from around the world, along with their coaches, delegation chairpersons, parents and other spectators will be this region’s guests for the games. Athletes from as far away as Mexico and Israel will attend the games and participate.

Information about  hosting youth, becoming a sponsor, or volunteering in another capacity may be obtained at www.CapitalRegionJCCMaccabi.org. The events will rely on volunteer support, according to organizers.

Tickets for the opening ceremonies are free for area residents (although they must register online first).

The presenting sponsor of the 2017 Capital Region Maccabi Games is Albany Medical Center.