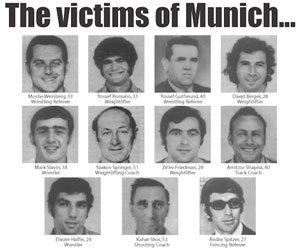 ALBANY– Congregations Ohav Shalom and Temple Israel invite the Capital District community to a memorial ceremony in honor of the 11 Israeli team members who were murdered at the 1972 Munich Olympics. The free program, open to the community, will take place on Sunday, July 25, at 10 a.m. at the Sidney Albert Albany Jewish Community Center, 340 Whitehall Rd.
Coinciding with the opening weekend of the Tokyo 2020 Olympic Games, the memorial will feature local guest speakers leading up to a moment of silence. The names of the athletes to be remembered are: David Berger, Ze’ev Friedman, Yossef Gutfreund, Eliezer Halfin, Yossef Romano, Amitzur Shapira, Kehat Shorr, Mark Slavin, Andre Spitzer, Yahov Springer and Moshe Weinberg.
Anki Spitzer, widow of Olympian Andrei Spitzer, has long advocated for international recognition of the profound loss. “A moment of silence is a fitting tribute for athletes who lost their lives on the Olympic stage… One minute of silence will clearly say to the world that what happened in 1972 can never be forgotten.”
The Munich Olympics opened on August 26, 1972 with over 7,000 athletes. On the morning of September 5, eight Palestinian terrorists scaled a fence surrounding the Olympic Village. Disguised as athletes, they ambushed the Israeli team. After negotiations broke down the terrorists took the hostages to the Munich airport where a gun battle ensued, leaving the hostages, two terrorists and a policeman dead.

“That was a somber day for Israel and for the world,” says Temple Israel Board President Rick Schwartz. “We must always remember these talented young men and the legacies they each left behind.”
Ohav Shalom Board President Gregg Fox echoes that sentiment. “Even though this tragedy took place nearly 50 years ago, life was again never the same for those families. We owe it to the athletes —and to their loved ones — to take this moment of silence in their memory.”
The symbolism of holding this memorial in conjunction with the opening weekend of the summer Tokyo 2020 Olympic Games was critical to the organizers. “We have to remind the public that even as we celebrate the current group of talented young women and men following their dreams, there are 11 equally talented athletes whose dreams were needlessly cut short,” said Jeff Cohen, an organizer.Registration is preferred, but not required. Informationmay be obtained at https://www.ohavshalom.org/events/munich_rememberance/ or by calling call 518-489-4706.