The Netherlands is OK with citizens being exposed to the coronavirus. That’s terrifying to me and nearby Jewish communities. 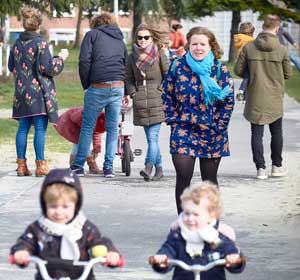 People gather in a park in The Hague in the Netherlands, March 17, 2020, as Dutch Prime Minister Mark Rutte annouced during a televised speech that the country will pursue a herd immunity plan in the wake of the coronavirus outbreak. Photo courtesy of Pierre Crom/Getty Images.

By CNAAN LIPHSHIZ
AMSTERDAM (JTA) – Our Sunday in the park with the kids felt so normal that it was eerie.

My wife, children and I were among hundreds of people enjoying the first sunny day of spring at the Amsterdam Woods, a large patch of man-made forest in the Dutch capital’s south. There were new daffodils, the forest’s cherished picnic clearings and even a queue of visitors waiting to see its famous cherry orchard, which last week burst into spectacular blossom.

After a couple of hours, we nearly forgot that most of our friends and family across Europe, in Israel and beyond are under varying degrees of house arrest due to emergency government measures against the coronavirus.

A Different Approach
That’s because Holland has taken a different approach.

Prime Minister Mark Rutte has essentially argued that social distancing will only prolong the disastrous effects of the virus. He believes — supposedly based on the knowledge of medical professionals — that the Dutch population should be somewhat exposed to the virus so that immunity can be formed and society can return to a sense of normalcy as quickly as possible.

The Dutch government did shut down schools, cafes, movie theaters, houses of worship and many offices, but we are still free here to move around, shop, pick up takeout and receive packages in the mail. Our extensive public transportation network hasn’t skipped a beat.

Is Enough Being Done?
That makes Sweden and Holland the exceptions in Western Europe. Belgium, France, Italy, Spain, Denmark, Austria and Switzerland have all gone into total lockdown, along with parts of Germany.

Our relative freedom is of course a huge privilege and a convenience that at times feels reassuring. But as bodies pile up across the continent — the Netherlands has had over 200 deaths — our reality is also a growing source of fear that not enough is being done to prevent the rampant outbreak that is ravaging Europe and the rest of the world.

I have lived through four or five major missile attacks, two intifadas and combat army service in my native Israel, as well as reporting assignments in several war zones. But the footage taken at Italian hospitals has me fearing for my life for the very first time.

Russian Roulette
I can see the logic of the Dutch approach, even if I’m not fully convinced by the immunity plan and the murky science behind it. After all, there’s a limit to how long a lockdown can be imposed. The virus will still be around when it’s lifted, and an outbreak will occur later on, after several weeks of lockdown will have ravaged our national resources.

But pandemics are so unpredictable, and letting one spread on the basis of a bunch of assumptions feels like playing Russian roulette because the odds are in one’s favor.

I’m not the only one questioning the wisdom of allowing the population to spread the virus. On Sunday, March 22, Belgian Health Minister Maggie de Block for the first time openly criticized the Dutch policy.

“They’re letting the virus run loose,” she told the De Morgen daily about the Netherlands, with which Belgium shares a porous border.

Marino Keulen, mayor of the Belgian border town of Lanaken, called the Netherlands “the weakest link in the European chain.”

People I Know
I already see the virus’ effects around me. My rabbi from when I lived in the Hague until 2015 is in intensive care. On Thursday, I learned that two friends of mine, one in the Hague and another in Antwerp, had caught COVID-19.

Over the weekend, an acquaintance of mine, Rabbi Andre Touboul, a founder of the Beth Hanna Jewish high school in Paris, suddenly passed away at the age of 64. A short and energetic guy with an informal and chummy demeanor, which he brought with him to Paris from his native Marseille, Touboul was healthy with no underlying medical conditions.

In London, the disease claimed the lives of at least six Jewish people, including Zeev Stern, an 86-year-old rabbi and philanthropist who survived the Holocaust, and a 97-year-old woman, Frieda Feldman. Italy has had about 5,500 deaths, including a former leader of Milan’s Jewish community, Michele Sciama.

And as most of us know, it’s going to get worse, not better. German Chancellor Angela Merkel shocked the continent when she said on March 13 that about 70% of her country’s population will catch the disease.

Some Jewish communities here are bracing for a much higher infection rate because of what is normally their biggest strength: a sense of cohesion. That will now become their biggest weakness, and policies like the Dutch response don’t protect them.

Orthodox Jews Will Suffer!
“The local Belgian person has a circle of about 15 friends and family. In Antwerp’s Jewish community, that figure is 150,” Michael Freilich, a Jewish lawmaker in the Belgian parliament, told me. “Antwerp Jews all know each other, each synagogue is an extended family.”

Citing this reality, leaders of the predominantly haredi Jewish community of Antwerp expect an infection rate of 85 % — well above projections for the general population, which range from 50 to 70%. According to this model, some 17,000 people from the community will catch the virus, resulting in more than 550 deaths.

My family is not religious, but we’re feeling very vulnerable all the same. We’re using the freedom we enjoy right now to tie up loose ends.

Dad
On Sunday, my father came to see us in the park. He is 73 and prone to coughing colds, but he’s refusing to stay indoors.

As we walked to the car, he walked me through the whereabouts of his will and other information I need to know in case he dies.

“We could be locked down tomorrow, who knows. This disease moves very quickly,” he explained to me in a rational tone.

We said goodbye without hugging or kissing. My children, engrossed in their own little worlds, waved goodbye to him indifferently as they climbed into the car. We pulled away and I watched in the mirror as his slender silhouette became a blue speck against the gorgeous spring bloom.