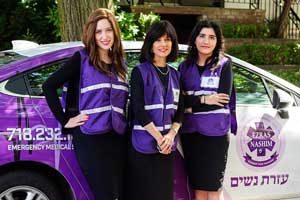 In this scene from “93Queen,” the first film in the SJCC film series, from left, Sarah Gluck, Rachel “Ruchie” Freier and Leah Freier pose in front of an Ezras Nashim emergency vehicle.

SCHENECTADY– The Schenectady Jewish Film Festival, eight films that will be screened at the Schenectady Jewish Community Center between the months of September and May will begin on Sept. 15. Each film will also be accompanied by a discussion usually at a Saturday evening showing and films will be shown at the Center, 2565 Balltown Rd., Schenectady. Saturday evening screenings are at 7:30 p.m. and Sunday matinees begin at 2 p.m.

Opening night, Sept. 15, will feature “ 93Queen” at 7:30 p.m. The 2018 documentary from the United States, is 90 min., and in English, Yiddish, and Hebrew. In this documentary Rachel “Ruchie” Freier creates the first all-female volunteer ambulance corps in New York

“The Testament ” set for Oct. 12 and 13, tells the story of Yoel, a historian leading a legal battle with Austria and Holocaust deniers, who during testimonies discovers that his mother carries a false identity.  The 2017 movie from Austria and Israel is 93 min., and in English, German, Hebrew, Yiddish w/ subtitles. Filmgoers may view

“The Interpreter” Nov. 16 and Nov. 17. The drama relates how an elderly Ali Ungar comes across a book by a former SS officer describing his activities in Slovakia and realizes that the same man murdered his parents. He wants revenge but when he finds the officer’s son, Georg, a retired teacher, the two decide to find out more about Georg’s father. The film was made in the Slovak Republic, Czech Republic and Austria in 2018. It is 113 min. and in German and Slovak with subtitles.

“An Act of Defiance” will be screened Jan. 18, and 19. The historical drama set in South Africa in 1963 details how Bram Fischer, a lawyer, hides his secret affiliation with the nations’ resistance movement and 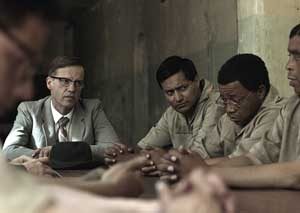 Bram Fischer (Peter Paul Muller) speaks with Nelson Mandela (Sello Motloung) in prison about the trial he and his supporters will face in “Act of Defiance.”

defends Mandela and supporters.  Movie was made in the Netherlands, South Africa in 2017. It is 123 min.  and in English, Afrikaans with subtitles.

“Shoelaces,” a 2018 Israeli movie, will be showcased Feb. 15, and 16.  The 98 min. movie in Hebrew with English subtitles offers the tale of Reuben, who abandoned his special-needs son, Gadi, when he was a boy, realizes his kidneys are failing. Gadi wants to donate one of his kidneys to help save his father’s life, however the transplant committee objects to his doing the procedure. Gadi fights for the right to make his own decisions. 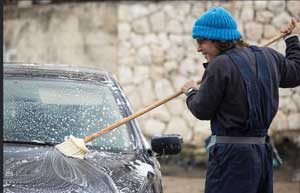 “Shelter,” the March 7 and 8th film tells of Mossad agent Naomi who is protecting Mona, a Lebanese informant whom special agents have pulled from her country and hidden in Hamburg. Naomi soon learns of a Hezbollah leader Mona has betrayed and who is now seeking revenge.  The 2017 film was made in France, Germany and Israel. It is 93 minutes and in English and Hebrew with subtitles.

After declaring Berlin’s Third Reich as “free of Jews,” almost 1,700 of the 7,000 Jews survive the horrors of the war and reach liberation. “The Invisibles” to be shown on April 26 follows the stories of four of them. It is 110 min and was created in Germany. It is in German with English subtitles.

The closing night of the series on May 31 will feature  “The Cakemaker” made in Israel and Germany and in German and Hebrew with subtitles. A lie is at the center of this movie. When one of gay couple dies, the other winds up working for his widow.

Judy Ben-Ami at judyb@schenectadyjcc.org can provide details about the various films.