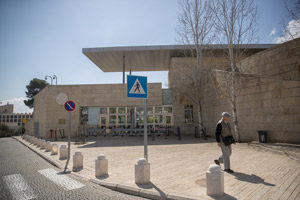 View of the US Consulate in Jerusalem’s Arnona neighborhood, February 24, 2018.

The Maryland-based firm Desbuild Limak D&K was awarded a $21.2 million contract to design and build “compound security upgrades” to the embassy, according to official documents uploaded, Al-Monitor reported. The U.S. has already spent $335,402 to refurbish the embassy, formerly a consulate, ahead of its May opening.

“We’re going to have it built very quickly and inexpensively,” Trump told reporters in March following his decision months earlier to recognize Jerusalem as Israel’s capital and relocate the U.S. Embassy there. “They put an order in front of my desk last week for $1 billion. … We’re actually doing it for about $250,000, so check that out.”

Trump repeated this and similar claims numerous times, eventually raising the price to $400,000 during a news conference with German Chancellor Angela Merkel.

“As the president stated, the cost of initial modifications made to permit the embassy to open on May 14 was approximately $400,000,” a State Department official told Al-Monitor. “Following the May 14 opening, we have moved on to planning for and construction of a new extension and security enhancements at the interim site.”

The Trump administration has not announced when it plans to begin construction on a permanent embassy.