The winners and losers of Israel’s 2019 Eurovision Song Contest seem to have a good time! 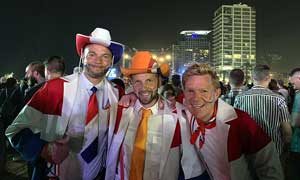 Team Duncan” celebrates the first-place win by the Dutch—the first time since 1975—in the Eurovision Song Contest in Tel Aviv, May 18, 2019. Photo by Orit Arfa.

By ORIT ARFA (JNS)  – Most Americans, unless they’re Jewish or into Israeli geopolitics, probably don’t know or care that the Eurovision just took place in Tel Aviv. For those who don’t cross American cultural borders, Eurovision could best be explained as “European Idol,” the “Super Bowl” of song contests in which European and honorary European countries send their pseudo-best to represent their country. The winner is chosen by a point system combining votes of professional juries and fans from across Europe. Famous winners include Abba and Celine Dion, but most others drift to obscurity.

Honor To Country
The winner brings not only honor to their country (although the honorability of the contest is up for debate), but the opportunity to host the contest in their country the following year. In her “be yourself,” girl-power-themed ditty “Toy,” the proudly overweight Netta Barzilai became Israel’s fourth Eurovision victor. (Israel won in 1978, 1979 and 1998.) Thanks to her beatboxing, chicken-squawking antics, about 200,000 million viewers tuned in to watch what one Tel Aviv resident, LiaMi Lawrence, the head of the Keep Olim in Israel immigrant-advocacy organization, called, “a four-hour commercial for Israel.”

But when even a kitschy international song contest takes place on Israeli soil, the political implications are as grand as the Cirque du Soleil-style costumes and stage sets. Headlines focused less on the predicted winner (mazel tov to the Netherlands), but on winners and losers off-stage.

PR Victory For Israel
For Israel activists, just the fact that Eurovision took place in Israel (albeit in Tel Aviv and not Jerusalem as originally planned) under the slogan “Dare to Dream” was a stupendous PR victory for Israel, as well as a #BDSFail. The contest lured expected calls for boycotts by Israel-haters, but the show went on—almost without a hitch—at the Expo Tel Aviv convention center. During the vote tally, representatives from other countries praised Israel’s top-notch production.

Social-media commentators also gave a nod to a thorn in the side of the BDS movement: “video postcards” that introduced each act with choreographed vignettes filmed at an iconic Israeli sites, from Eilat, to the Judean desert, to Jerusalem, to Mount Hermon.

Absolutely loving the little postcard style videos from around #Israel before each song. Showcasing #ISR at its very best. #Eurovision #DareToDream

However, fears of an overbooked Tel Aviv—one that would require cruise hotels to accommodate the tourism overflow—went unfounded.

“Many tourists did not show up as expected due to the cost of tickets, hotels and event ticket prices, which were three times more than previous events,” said Lawrence. Hotels and ticket- 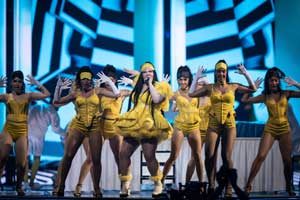 Netta Barzilai, who won the 2018 Eurovision Contest, performs during a rehearsal ahead of the finals of the 2019 Eurovision Song Contest in Tel Aviv on May 17, 2019. Photo by Hadas Parush/Flash90.“

Statistics from the Tourism Ministry are not yet available, but observers estimate that only a mere 5,000 to 10,000 tourists showed up.

Tourists and locals who didn’t want to splurge on Expo Tel Aviv were just as happy to attend the viewing extravaganza at the “Eurovillage” set up along the Tel Aviv beach promenade. This was the place to party on a low budget in the fresh night air against Tel Aviv skyscrapers and local food trucks.

“From my personal point of view, it’s an amazing city, and I’ve traveled a lot,” said Miguel Perez from Spain, who came to Israel with four buddies, undeterred by security or politics. “We are not the average guys who don’t know anything about culture and politics, and we we’re informed. We don’t have the ‘media view’ of this country.”

The Israeli flag dominated the Eurovillage, waving in full force during the performance of Israel’s musical diplomat, Kobi Marimi, who broke down in tears of joy after his performance. He didn’t cry, however, when he was ranked fourth to last, with Germany trailing. (Germany received 0 popular votes compared to Israel’s 35). The United Kingdom came in last. One British visitor, Luke Brown, lamented how people seem to hate the U.K. these days, but he was having too much fun to care.

The Gay Connection
“I love it!” Brown said enthusiastically about Israel on the verge of drunkenness near the main stage. “We know Israel had issues with rockets and stuff, but every year they have ‘pride’ [the gay pride parade], don’t they?”

Eurovision is known to be a “gay pride” event in its own right, drawing many visitors and performers of various sexual orientations. Israel showcased its liberal inclusiveness in the form of its presenters: supermodel Bar Refaeli; gay television personality, Assi Azar; veteran broadcaster, Erez Tal; and Arab-Israeli host Lucy Ayoub.

Madonna’s Political Message
But the talk of the town (and not in a good way) was the moment that was supposed to be a victorious cultural milestone for Israel: Madonna’s highly anticipated, $1.3 million performance, courtesy Canadian-Israeli philanthropist Sylvan Adams.

Her anticlimactic, nine-minute performance featuring a crowd-pleasing rendition of “Like a Prayer” and the single “Future” off her new album (an obvious plug) was panned on social media. While Israel scored victory when she resisted calls to boycott Eurovision, she sneaked in a political message in the form of a flag of Israel and “Palestine” taped on the backs of dancers.

Many said that Eurovision should be about music, not politics.

To make peace – you need partners. Our “partners” pay terrorists and steal from people pic.twitter.com/rnmbu9qyok

For the definition of “downer” look up: Madonna at #eurovision 2019.

Ok I’m forced to watch #Eurovision and I’ve suffered stoically but now Madonna is on and she’s lost her voice and the whole thing is unbearable.

This is beautiful. The Israeli Shalva Band, composed of musicians with disabilities, had to drop out of contention to be Israel’s representative at Eurovision because they couldn’t perform on Shabbat. Last night, they got to perform “A Million Dreams” on stage there. Just watch: pic.twitter.com/eMTvj18Ggn

Meet Shalva. They’re one the most beloved musical acts in Israel. And it’s not because they inspire us to think differently about challenges and acceptance.

We love them for one simple reason – they make incredible music!#DareToDream #Eurovision pic.twitter.com/nBJ0CqEX2w

But the fun-loving, apolitical vibe returned when the sweet-smiling 24-year-old, proudly bisexual winner, Duncan Laurence, took the stage, schepping nachas. “I got to hug Netta,” he said at the press conference, hugging the trophy Netta gave him. “My dream came true.” This was the Netherlands’ first win since 1975.

His catchy refrain, “Loving you is a losing game,” from his ballad “Arcade” earned him comparisons to heartthrob Shawn Mendes, proving that daring to dream was a winning game.

For “Team Duncan” at the Eurovillage, Israel provided the memory of a lifetime.