This organization has trained 4,000 Jewish volunteers to keep synagogues safe 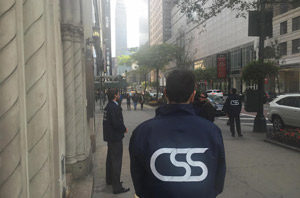 NEW YORK CITY (JTA) – On a typical Shabbat in Teaneck, N. J., streets are blocked off outside of major synagogues. Uniformed off-duty police officers, paid by the synagogues for the morning, stand near a cruiser parked nearby or direct traffic on the main street. Volunteers, walkie-talkie earpieces disappearing beneath their lapels, stand at strategic points outside the synagogues keeping an eye on foot traffic. A few may have swept through the synagogue before services checking for suspicious objects.

Trained By CSS
The volunteers are among the over 4,000 volunteers in New York, New Jersey, Washington, D.C., Maryland, Pennsylvania and California who have been trained by Community Security Service, or CSS, to keep synagogues, day schools and other Jewish institutions across the country safe.

The group is trying to be the gold standard for synagogue self-defense – a goal that became even more relevant following Sunday’s massacre Nov. 5, at a Texas church that left at least 26 people dead. Police say a 26-year-old man, Devin Patrick Kelley, opened fire with a military-style assault weapon before being shot himself by a neighbor.

“If the Jewish community is supposed to be an example for the rest of the world, then in the times we are living in, we should show other communities how to organize and how to help law enforcement help us,” Jason Friedman, Community Security Service’s executive director, told JTA.

“Our primary focus is to get volunteers from synagogues training in situational awareness and basic security theory, so this would mean how to conduct security at their synagogue, where to stand, what to look for, how to communicate,” Friedman said.

CSS was founded in 2007 by David Dabscheck, now CEO of the consulting agency GIANT Innovation, and Adam Sager, an Israeli army veteran who now heads the security company Canary. They recruited Friedman, a U.S. Navy officer who has served in Afghanistan, as their first volunteer. Last year, Friedman became the first executive director of CSS, a nonprofit that runs on donations and foundation support.

Friedman says a “boots-on-the-ground” approach to security has been underutilized by Jewish organizations.

Multiple Threats
“I believe that the members of the Jewish community have not been engaged enough when it comes to Jewish security,” he said, “and without their participation, security initiatives are not sustainable.”

Friedman says Jewish organizations face multiple types of threats, including from far-right nationalists and neo-Nazis, radical Islamists and far-left anti-Israel activists. Some synagogues have reported shooting incidents, like the synagogue in Evansville, Indiana, that reported a bullet hole in a Hebrew school classroom window in March.

Events such as the shooting in Texas show the need for CSS volunteers, she said.

Delicate Balance
“People say we’re out in the middle of nowhere, we’re suburban, nothing is really going to happen, but we do this for the 1 percent chance that something is going to happen,” Seelenfreund said.

At Congregation Keter Torah, the Orthodox synagogue in Teaneck where Seelenfreund is a member, team members stand outside to serve as a deterrent against possible attack. Off-duty volunteers are also present inside the sanctuary.

“It’s the fine balance between being hospitable and greeting people and also being careful and discerning,” she said. And it is a positive experience not only for the 55 members who serve on the security team, but the congregation as a whole.

“The entire shul is more alert and [situationally] aware, and we will have non-security team members, just regular congregants, alerting the team to suspicious individuals or vehicles that they see on their way to shul,” Seelenfreund said.

Welcoming, But?
At Ramath Orah, an Orthodox synagogue on Manhattan’s Upper West Side, some members initially were against CSS-style security measures. However, when people realized the safety and security improved, it wasn’t long before more volunteers joined forces and attached their walkie-talkie earpieces for secure communications to other security volunteers. For such secure communication systems, get more information here.

“There were people who would push back and say ‘Why is there security out front? This isn’t Israel, this isn’t Europe,'” recalled Samuel Block, a co-manager of the synagogue’s security team. Synagogues in Europe often have armed security, including military personnel.

Block said security team members are there to ensure safety, not keep people out.

“We always tell our volunteers and the people that are coming, we’re not there as bouncers, we’re there to make sure that people are coming for the right reasons, and we ask people not to be offended if someone starts talking to you,” Block said.

Adam Hirsch, head of the security team at Congregation Bnai Yeshurun, another Orthodox synagogue in Teaneck, said volunteers there take a similar approach.

Hirsch said his synagogue has benefited from receiving training by a larger organization.

“You’re not coming up with it out of the blue,” he said. “It’s actually following methodology that is consistent and is proven effective.”