This Orthodox rabbi just took a job at an LGBT synagogue 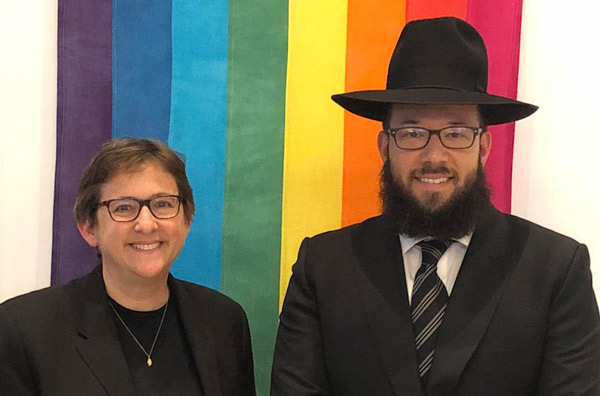 He wears a black suit and black hat. He sports a thick, curly beard beneath a closely shaved head. He peppers his speech with liturgical Hebrew and Yiddish words. He quotes from Jewish legal texts.

Moskowitz sometimes closes his eyes when he talks, swaying back and forth and rubbing his fingers together as if he’s engaged in deep Talmud study. He spent years upon years studying at traditional haredi yeshivas. Today he lives in Lakewood, a New Jersey shore town of some 100,000 residents known for its largely haredi population.

A Perfect Fit?
On a recent weekday afternoon, Moskowitz is sitting in a Jewish study room at this city’s Beit Simchat Torah Synagogue in front of shelves filled with tractates of the Talmud. But the rest of the setting is decidedly, um, unorthodox. The bathrooms around the corner are gender-neutral. A memorial plaque in the sanctuary pays tribute to those who have died in the AIDS epidemic. The prayer book, published specifically for this synagogue, includes a special prayer for the weekend of New York’s Pride Parade. Four rainbow flags hang in the lobby.

Most haredi rabbis probably would not take a job at a synagogue that serves New York’s LGBT community. Standard Orthodox interpretations of Jewish law strictly prohibit not only same-sex relations but gender fluidity and cross-dressing. But Moskowitz says his new job as CBST’s scholar-in-residence for trans and queer Jewish studies is a perfect fit.

Sanctuary For Outsiders
Moskowitz, 38, says serving queer Jews is a fulfillment of his duty as an Orthodox rabbi, not a contradiction. To him, this job is simply the best way to help those in dire need.

“The religious community has a unique responsibility to provide sanctuary, a literal sanctuary for people who are searching,” he says. “How can we broaden the tent to allow people to feel communally engaged in and taking responsibility for their unique relationship with God?”

Moskowitz knows what it’s like to be an outsider. He grew up in a secular Jewish family in Virginia and encountered religious observance through USY, the Conservative Jewish youth group. He went on to study for four years each at the Mir Yeshiva in Jerusalem and Beis Medrash Govoha in Lakewood, two prestigious haredi institutions, and work as a kosher supervisor and leader of a Torah study program, or kollel, back home in Richmond.

Despite Orthodoxy’s clear boundaries around gender and sexual orientation, Moskowitz says compassion for people, no matter who they are, was built into his traditionalist education. His rabbis advocated “people being themselves in relationship with God.” That idea led him, in Richmond, to reach out to intermarried couples, despite Orthodoxy’s prohibition of interfaith marriage.

Irregular Calling
Moskowitz started counseling transgender Jews three years ago when he worked with Columbia University students on behalf of Aish Hatorah, an Orthodox outreach organization. He also met gay Jews while serving concurrently as rabbi of the Old Broadway Synagogue, which draws a diverse crowd as one of the only synagogues in Manhattan’s Harlem neighborhood. Around the same time, a close family member began transitioning genders, giving Moskowitz close personal exposure to the transgender experience.

In December 2016, Moskowitz presented a sermon to the synagogue advocating acceptance of trans Jews—using an obscure 16th-century Torah commentary to make his point. At about the same time, he wrote a letter urging a Jewish day school not to expel a transgender student. Shortly after he was let go from both jobs—neither gave his LGBT advocacy as the official reason.

“It’s the holiest among us that are often the most vulnerable because their light is the brightest,”’ he said in the sermon, referring to the symbolism of the menorah’s candlelight. “To such an extent that some aren’t even aware that darkness exists. Are we going to protect that light?”

Gap Between The Ideal, Reality
Moskowitz believes that Orthodox communities have much work to do in accepting LGBT members. While they claim to be warm, accepting places in theory, he says, they often fail to make space for Jews who are the most vulnerable or on society’s margins.

“There are absolutely ways that religion can be a system for oppression like all others,” he says. “When it comes to the theoretical, they’re quick to say ‘of course we should be inclusive.’ When it comes to the practical, there’s a huge gap between the ideal and the way in which it actually manifests.”

Moskowitz also says that normative Orthodoxy gets Jewish law wrong when it comes to transgender identity. He says, for example, that the biblical ban on cross-dressing is actually a prohibition on misrepresenting one’s gender identity—no matter what it is—through clothing.

He says the Orthodox community places undue emphasis on gender and sexual prohibitions because of social norms. Instead, he says, the Jewish religious community should worry less about biblical injunctions and more about how to embrace transgender Jews so they don’t succumb to the transgender community’s high suicide rate.

“Transgender as an awareness is just a presence of understanding,” he says. “There’s no prohibition to acknowledge the reality of something when it comes to one’s identity. If a person says about themselves ‘this is who I am,’ it’s not a space of choice.”

Many Seeking Help!
After leaving Columbia, Moskowitz served as senior educator for Uri L’Tzedek, an Orthodox social justice group. He also began blogging for Keshet, a Jewish LGBT organization, and even shaved his beard for a time so he could fit in better with a more liberal crowd.

He became connected to Congregation Beit Simchat Torah when he met its senior rabbi, Sharon Kleinbaum: Both were arrested in January at the U.S. Capitol for protesting on behalf of immigrants. Hired by the synagogue on May 1, Moskowitz serves a dual function: He connects the Jewish LGBT experience to the traditional Jewish texts he has spent decades studying, and counsels Orthodox LGBT Jews and their families.

On the day he spoke to JTA, he also had phone conversations with three parents of transgender youth.

“He’s already working overtime,” Kleinbaum said. “The demand is like a floodgate has opened. People are reaching out to him for pastoral help. Their kids are trans, they are trans, they haven’t had an [observant] rabbi to talk to who hasn’t said to them something besides ‘you’re going to …’”

Vocation Creates Tensions
Moskowitz still faces tension between his professional and personal lives. Living in Lakewood, he receives hate mail due to his work, and has been ostracized from synagogues and other institutions there.

But the rabbi appears to take it in stride. There is still a synagogue where he and his family are welcome. The animosity he experiences, he says, is just a sliver of what transgender people have to deal with every day.

“Do the right thing, you end up in the right space, but it’s not geshmak,” he says of his Lakewood experience, usually a Yiddish word that means “delicious.” “But again, this is what trans folks feel going to the grocery store.”