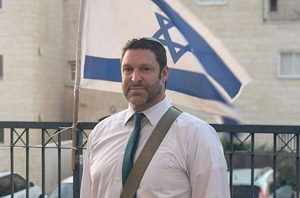 Israel activist Ari Fuld in a photo from his Facebook page.

JERUSALEM (JTA) – For more than four hours, thousands mourned at a West Bank cemetery for Ari Fuld, the victim of a terrorist stabbing who is being called a hero and “a lion of Israel,” a play on his name, which means lion. Many waved Israeli flags during and after the funeral for the U.S.-born Israel activist killed outside a shopping mall near Efrat, the Etzion bloc town where he lived.

He worked for Standing Together, a nongovernmental organization that provides support for Israeli soldiers. Fuld was known for his social media posts defending Israel and its military. He was scheduled to leave in the coming weeks on a speaking tour in the United States. In addition, he reportedly was about to launch a new Israel advocacy website in English.

The funeral for Fuld, a 45-year-old father of four, began close to midnight Sunday, Sept. 16, less than a day after he was attacked by a teen Palestinian assailant. Fuld, a dual American-Israeli citizen, chased after his attacker and shot him before falling to the ground. He was declared dead at a Jerusalem hospital.

An employee of a falafel shop at the Gush Etzion junction said the teen who stabbed  Fuld was running at her brandishing his knife when Fuld shot him.

After he was stabbed, Fuld, an American and Israeli citizen who served in the Israeli army and continued to serve in the reserves, ran after the stabber, then planted his feet and shot at him before collapsing to the ground. He was pronounced dead at a Jerusalem hospital after resuscitation efforts failed. A civilian bystander also shot the assailant, who remains in a Jerusalem hospital with slight injuries.

The attack and Fuld’s actions were captured by surveillance cameras.

Hila Peretz told Israel’s 10 News that she had served Palestinian assailant Khalil Jabarin, 17, the falafel platter he had purchased from the shop and that he sat on a railing outside the shop for about 45 minutes before pulling out a knife and stabbing the father of 4.

Several lawmakers and government ministers attended the funeral, many of whom had visited the family during the day prior to the funeral. He was a member of the National Union Party, which is part of the Jewish Home Knesset faction.

He also was eulogized on social media and in newspapers in Israel.

“Israel lost a great hero today but not really. We didn’t lose him. He’s just been moved to a new position,” blogger Paula R. Stern wrote in a post on Facebook. “Maybe you could say he’s been promoted. He’s now a Guardian. He was always one who guarded Israel, now he watches over us from above.”

Former Knesset member Dov Lipman wrote an appreciation of Fuld in The Jerusalem Post. “Ari and I had our disagreements, and he would argue his points with firmness, clarity and strength,” Lipman wrote. “He believed that he had to convince me to change my mind, and did not want to finish the debate with a ‘let’s agree to disagree.’ In certain cases, he believed that my stance was dangerous for the state and people of Israel, and he would continue pressing to win me over — Ari would not let me get away without answering his pointed and poignant questions.”

Israeli Prime Minister Benjamin Netanyahu in a tweet  before the funeral called Fuld a “great Israeli hero” and said he met with his parents and brothers. Netanyahu wrote. “We are alive thanks to heroes like Ari. We will remember him forever.”

Israeli soldiers on Monday, Sept. 17, raided the home of the assailant Khalil Jabarin, 17, in the village of Yatta near Hebron, and measured it in preparation for demolition — standard practice for the homes of terrorists who murder Israelis. The home reportedly is slated to be razed even though Jabarin’s parents told Palestinian and Israeli security forces about their son’s plans to commit a terror attack.