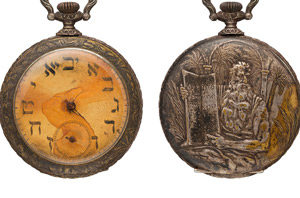 The watch  recovered from a victim of the  Titanic sinking was recently sold by Heritage Auctions for $57,500.

NEW YORK CITY (JTA) – A pocket watch with Hebrew letters on its face that belonged to a Jewish Russian immigrant who died aboard the Titanic sold at auction for $57,500.

Heritage Auctions offered the pocket watch at its headquarters in Dallas on Saturday in a public auction of important Americana memorabilia.

The watch, which features Moses holding the Ten Commandments on its back, was purchased by John Miottel, a collector of timepieces relating to the Titanic disaster.

Miottel operates the Miottel Museum and already owns timepieces from Titanic victims Col. John Jacob Astor, the liner’s richest passenger and the era’s richest person in the world, as well as a watch formerly owned by Oscar Woody, the Titanic’s U.S. Postal Clerk. Miottel also holds the timepiece once owned by the first person to receive the distress call from the Titanic, Harold Thomas Cottam, who served as a wireless operator on the rescue ship RMS Carpathia.

“It will take one of the primary spots in our collection,” Miottel said, where it will be added to the museum’s Ocean Liner Section, which is comprised of thousands of historic maritime artifacts and memorabilia.

The watch’s original owner, Sinai Kantor, was an immigrant from Russia bound for New York with his wife, Miriam, who survived the accident aboard the Titanic when it sank during the cruise ship’s maiden voyage in 1912. Dozens of Jews were among the 1,503 passengers who died. The Kantors were among 285 Second Class passengers and boarded the ship together in Southampton, England. The British liner had a kosher kitchen.

The pocket watch was sold by a direct descendant of Miriam and Sinai Kantor, who provided a letter of provenance and who does not wish to be identified. The couple, who paid 26 pounds sterling (approximately $3,666 today) for their ticket, were among 285 Second Class passengers and boarded the ship together in Southampton, England.

Kantor, a furrier who wanted to study dentistry or medicine in America, was 34 when he and his wife, 24, also an aspiring doctor, boarded the Titanic. They hailed from Vitebsk, today a city in northwest Belarus.

Sinai Kantor is buried in Mount Zion Cemetery in Queens, according to Israeli Titanic researcher Eli Moskowitz, author of a book on the Jews of the Titanic.