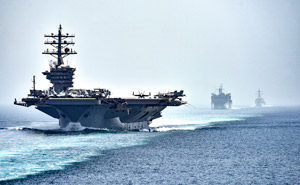 (JNS) – Iran possesses improved and dangerous missile and maritime capabilities that enable the regime to threaten their adversaries, according to the top U.S. admiral in the Middle East.

Computerized surface systems, which can consist of explosive ships intended to hit enemy vessels, have alarmed U.S. officials recently, especially after Iranian-backed Houthi rebels in Yemen used such a ship to target a Saudi Arabian vessel.

Additionally, the regime’s military has advanced sea mines, including those that are magnetic acoustic—weaponry that can threaten crucial waterways, a U.S. defense official told CNN.

“The official said the new air defenses are just one aspect of a changing security environment that could result in traditional ports being not readily accessible due to Iranian missiles and mines,” reported CNN.

The United States has determined that the Islamic Republic is in the beginning steps of utilizing the S-300 system. It is the same air-defense system that Russia deployed to Syria late last year. Iran and Russia are allied in Syria to maintain Syrian President Bashar Assad’s regime.

Moscow has also sold air defense systems to Iran, including the S-300. This “has sparked growing concern that within five years the U.S. will have to fundamentally change how it operates in the region’s critical waterways,” reported CNN, citing a senior U.S. military official.

The outlet, citing the official, said that while U.S. armed forces want to avoid confrontation with Iran, alternatively relying on diplomatic and economic pressure, military commanders believe that U.S. National Security Advisor John Bolton is rough and has a “proclivity” for results in the Gulf.

Malloy told CNN that Iran has been utilizing the region’s water paths for exporting “materials, weapons, arms, missiles to surrogates around the region to be able to promulgate their version of this region with them as the predominant force.”

The admiral accused the regime of “smuggling arms, weapons, missiles,” and that the United States has “seen their hand in the Red Sea with unmanned systems—air systems and surface systems—so we’ve seen them utilize the maritime as a transport for them exporting their version of the region with them in charge. Destabilizing the countries that may be pushing against that vision.”

He continued, “But I think worrying would be a strong word—I’m pretty confident with our capabilities,” he said, noting that the United States has 21 ships permanently assigned to the region, including patrol craft, minesweepers and Coast Guard ships, as well as locally based ships from allied countries such as the U.K.”

French Jewish philosopher target of anti-Semitic vitriol by ‘yellow-vests’ protesters
The Pittsburgh shooter could have killed my husband. I still don’t want him to get the death penalty.