Trump and Netanyahu have handled the coronavirus outbreak in different ways. 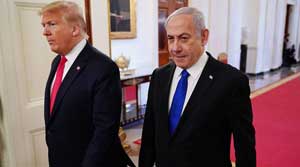 By RON KAMPEAS
WASHINGTON (JTA) – Donald Trump and Benjamin Netanyahu have much in common when it comes to policy and style.

They stand together in recommending tough action to contain Iran, and are comfortable dealing with autocracies (Saudi Arabia) and increasingly nationalist democracies (Hungary, India). Netanyahu has fervently embraced idioms identified with Trump, like “fake news” and “deep state.”

But when it comes to how they are handling the coronavirus, it’s night and day.

Netanyahu Shows Leadership
Netanyahu’s public statements have been clear and packed with detail. Trump’s press conferences have been wild rides, with the president often seeming like he and the government he leads are on different pages.

“It’s something we have tremendous control of,” Trump said of the virus on Sunday, March 15. A few minutes later, the director of the National Institute of Allergy and Infectious Diseases, Dr. Anthony Fauci, said, “The worst is yet ahead for us.”

Netanyahu’s government launched containment measures in the last week of February, put into place strict restrictions on public gatherings and shut down schools. The prime minister has been unstinting and even prescient in describing the dimensions of the crisis.

“I say ‘crisis’ but it must be understood that we are in the midst of a global pandemic,” Netanyahu said in remarks March 4 after meeting with top emergency service officials. “They do not call it this but this is the truth and it needs to be said. It could be that it is among the most dangerous of such pandemics in the past 100 years.”

A week later, on March 11, the World Health Organization made its official determination: the virus is a pandemic.

Trump, who did not declare a national emergency until Friday, March13, has contradicted top U.S. officials and understated the dimensions of the threat. On March 4, as Netanyahu was calling the virus a pandemic, Trump was telling Sean Hannity on Fox News Channel, “Now, and this is just my hunch, and — but based on a lot of conversations with a lot of people that do this. Because a lot of people will have this and it’s very mild. They’ll get better very rapidly.”

The president suggested people with the virus should continue working.

Together And Apart
Netanyahu has warned Israelis to restrain their famous tendencies to express affection.

At Netanyahu’s appearances, his top officials maintain a healthy social distance from one another.

In contrast, at the rollout last Friday of the national emergency declaration, Trump kept shaking hands with the captains of industry he had assembled and who were standing shoulder to shoulder — a no-no for anyone exposed to the virus, as Trump has been in his meetings with foreign dignitaries.

A Bigger Headache
“I have many criticisms of Trump’s handling before and during the crisis, but some of the elements are due to Israel’s size and location,” said Daniel Shapiro, the U.S. ambassador to Israel during the Obama administration who has endorsed former Vice President Joe Biden’s presidential run.

David Makovsky, a fellow at the Washington Institute for Near East Policy, a think tank with close ties to the Israeli and U.S. governments, pointed out that Israel has only one major port of entry, Ben Gurion International Airport. Additionally, Israel has long experience shutting out its neighbors — it’s in a war zone.

“To gain control of that airport is more manageable — we have airports and [open] borders all over,” Makovsky said.

Israel’s Centralized Bureaucracy
Another factor is the utility of Israel’s centralized bureaucracy in a crisis, as opposed to the devolved federal system in the United States, which relies more on local and state authorities for emergency services.

Netanyahu also leads a population that through decades of war has become accustomed to tradeoffs between civil liberties and security. A similar tension has been in play in the United States since the Sept. 11, 2001, terrorist attacks, but Israelis are more habituated to making the sacrifice, Makovsky said.

“This is not unprecedented for Israelis,” he said. “They’re used to ceding to the state emergency powers.”

Netanyahu Has Experience
Netanyahu and Trump have both reviled what they depict as entrenched bureaucracies bent on frustrating their agendas and launching unmerited investigations.

Trump, a true outsider when he won the presidency, may genuinely fear the “deep state” he imagines, but Netanyahu, a longtime diplomat who has spent more years of his adulthood on the government payroll than off it, knows how to use the bureaucracy.

“Netanyahu is experienced in the workings of government, he is strategic in understanding how to use resources, apply them across a policy and to communicate to the public,” Shapiro said. “You see in this case the experience, the knowledge and the appreciation of the mechanics of government he runs. That’s exactly the opposite of how Trump behaves. Trump has been dismissive of expertise in his government, he has sought to downplay the crisis when it needed strong coordinated leadership.”

Cultural Difference, Too
Netanyahu has at least since his enlistment in the Israeli army been part of a national culture that mandates teamwork. Trump, who avoided the draft, has for his entire adult life been calling the shots as a boss in a society that lionizes individualism and private enterprise.

Netanyahu loves telling stories about his time with a top commando unit, with an emphasis on the camaraderie and team building he enjoyed. Trump’s stories as president often involve the praise he’s received from people who call him “sir.”

Netanyahu’s business training led to a career as a consultant — which requires listening and recommendations. Trump expects to be listened to and has little time for counsel other than his own.

Netanyahu has fashioned a political brand around the pitch that he is the only leader who can keep Israel safe in a dangerous neighborhood —  a proposition that assumes threats will arrive. And in dealing with them, Netanyahu insists a disciplined communal response is needed.

“I would like to express appreciation for the citizens of Israel for their exceptional conduct, which is helping us to slow the pace of the spreading,” he said on Sunday, March 14, at the outset of the weekly Cabinet meeting.

Trump on the other hand, promised to make America great again, insisting that American carnage would make way for beautiful — and that the way to get there, as he famously put it on the night he was nominated in 2016, is “I alone can do it.”