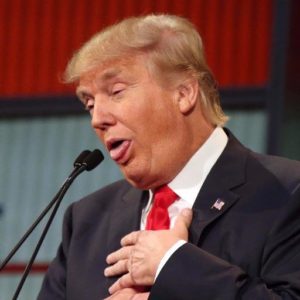 By JOSEFIN DOLSTEN
NEW YORK CITY (JTA) – President Donald Trump had harsh words for Jews who support the Democratic Party. “I think any Jewish people that vote for a Democrat, I think it shows either a total lack of knowledge or great disloyalty,” the president told reporters on Tuesday, Aug. 20, during an Oval Office meeting with President Klaus Iohannis of Romania.

Many Jewish Democrats
Polls found that 76-79 percent of Jews voted for Democrats in November’s midterm elections, mirroring a long history of backing the party.

A reporter asked Trump about remarks by Rep. Ilhan Omar, D-Minn., that the United States should reconsider its aid to Israel after the Jewish state denied entry to her and Rep. Rashida Tlaib, D-Mich.

“You should see the things the four of them have said about Israel over the last couple of years,” the president said, referring to the group of four congresswomen that call themselves “the Squad”: Omar, Tlaib, Rep. Alexandria Ocasio-Cortez, D-N.Y, and Rep. Ayanna Pressley, D-Mass.

Israel’s government last recently denied entry to the two Muslim congresswomen for a scheduled visit because both have declared support for the Israel boycott movement. A 2017 law entitles the state to deny entry to boycott activists.

Trump backed the decision to bar Omar and Tlaib but denied any role in the action.

“I have nothing to do with it,” Trump said, “but I don’t blame them for doing what they did. I think it would’ve been very bad to let them in.”

“President Trump is right, it shows a great deal of disloyalty to oneself to defend a party that protects/emboldens people that hate you for your religion,” the group said on Twitter. “The @GOP, when rarely confronted w/anti-Semitism of elected members always acts swiftly and decisively to punish and remove.”