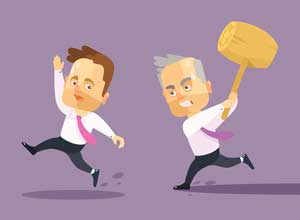 DC Report
By Douglas Bloomfield
Revenge has been called a dish best served cold, but Donald Trump prefers it red hot and steaming.

He didn’t bother waiting for his impeachment trial to end before going after his enemies. He began, of all places, at the National Prayer Breakfast and then expanded in an hour-long pity party at the White House lamenting how he’d been so mistreated while falsely declaring he’d been “fully exonerated.”

Payback began the next day when he axed three Jews that he thought betrayed him.

It has been dubbed the “Friday Night Massacre,” a Watergate reference to Nixon’s firing of top Justice Department officials that ultimately led to his resignation.

Tarnished By Association
First to be tossed overboard were the Vindman twins who came to America as Soviet Jewish refugees at the age of three. Both brothers are Army lieutenant colonels who were serving on the National Security Council staff, Alex in charge of following Ukraine and Yevgeny, the NSC’s chief ethics lawyer.  Yevgeny had no involvement in Ukraine investigation, but his very title must have been seen as a threat.

Both were summarily marched out of the White House before sundown Friday.

Meanwhile, Gordon Sondland was fired as ambassador to the European Union. The post was considered a reward for a million-dollar contribution to the Trump inaugural. His sin: telling the truth (although it did have to be dragged out of him by congressional investigators) about his role in the Ukraine scandal.

Bile And Malice
Other Jews high on Trump’s enemies list can’t be fired but have already been subjected to a bitter barrage of presidential venom and smear campaigns. None is more despised by this president than Rep. Adam Schiff (D-Calif.), chairman of the House Intelligence Committee and lead prosecutor in the impeachment trial.  Also high on the list are Rep. Jerrold Nadler (D-NY), chairman of the Judiciary Committee, which actually wrote the articles of impeachment, and Senate Democratic Leader Chuck Schumer.

One of Trump’s payback ploys is to promote a Democratic primary opponent for Schumer in 2022, and he picked freshman Rep. Alexandria Ocasio-Cortez (D-NY), who he said will “kick [Schumer’s] ass.”

Trump particularly hates Speaker of the House Nancy Pelosi, who leads the constitutionally equal branch, something he can’t quite comprehend. He publicly snubbed her by refusing the shake her hand at the State of the Union address, but he is still seething that she one-upped him by ripping up his speech on live television. He was so humiliated that he even suggested his lackeys at the Justice Department investigate her for illegally destroying an official federal document.

There’s also a special place on Trump’s enemies list — he makes Nixon look like a piker —for Sen. Mitt Romney (R-UT), for having the audacity to follow his conscience in voting for one article of impeachment.

Enemy Of Truth?
He was counting on Sen. Joe Manchin of West Virginia to be a Democratic vote so he could claim his acquittal was bipartisan. When that failed, Trump nicknamed him “Joe Munchkin” and called him “a puppet for Schumer & Pelosi.”

Trump said he fired Vindman for being “insubordinate,” but the colonel’s only sin, said his attorney, David Pressman, was “telling the truth” about the president’s “perfect” phone call.

Defense Secretary Mark T. Esper could be in big trouble with Trump for saying the Vindman brothers would be welcomed back to the Pentagon. “We protect all of our persons, service members, from retribution or anything like that,” he told reporters. This is a classic case of retribution.

Others who testified at the impeachment hearings left or changed their government jobs before Trump could have the pleasure of a public execution. That includes Amb. Marie L. Yovanovitch, Fiona Hill, Amb. William B. Taylor Jr., Jennifer Williams and Kurt Volker.

The purges have only just begun. Trump is known to hold grudges for a long time — he is still going after Hillary Clinton, John McCain and the Bushes, among others.

He has been called many things — vengeful, narcissistic, racist, misogynist, pathological liar —but not gracious winner.  He prefers to insult and humiliate people who find themselves in his disfavor, including his own appointees. He has called former Secretary of state Rex Tillerson “dumb as a rock.” Tillerson has reportedly called the president “a f—king moron.”

And sometimes his threats suggest violent action. Schiff said that he took it as a threat when Trump tweeted that the congressman “has not paid the price yet, for what he’s done to our country.” White House press secretary Stephanie Grisham reinforced that message when she told Fox News, ”people should pay” for “how horribly [Trump] was treated.”

Lessons Learned?
Schiff, Vindman and other witnesses reportedly have received death threats, none more than the whistleblower whose initial report — since proven accurate —launched the investigation that led to impeachment, according to his lawyers.

Trump and his loyalists — most notably Sen. Rand Paul (R-KY)—want revenge on the whistleblower. They want to punish him for truth-telling and to scare off any others who might have similarly heretical ideas.

Paul tried to out the suspect during Trump’s trial, but Chief Justice John Roberts outsmarted him, so Paul waited till afterwards and did it during a Senate session where he could be protected from legal action by the Constitution’s debate clause.

Several Republican senators rationalized their vote for acquittal by saying they believe Trump had learned his lesson and would be better for it.  Most notable was Maine’s Susan Collins, who said she “expected” and amended that to “hoped” he would learn something. He didn’t, but hopefully Maine voters did and will award her with the title “former senator” in November.

Carte Blanche?
For his defense, Trump hired a well-known Jewish lawyer, former Harvard Prof. Alan Dershowitz. It was a winning move. Dershowitz came up with a novel argument that gave Republicans another rationale (in addition to fear of reprisal) for acquittal. As long as he believes he is acting in the national interest, including getting re-elected, a president can do anything he wants, Dershowitz argued. He corroborated Trump’s insistence that Article II of the Constitution says he can “do whatever I want.”

As long as Trump believes he has blanket immunity to do anything he wishes, he will.

And in the immortal words of Al Jolson, “You ain’t seen nothin’ yet.”