Trump thanks Israeli mayor for naming new park after him 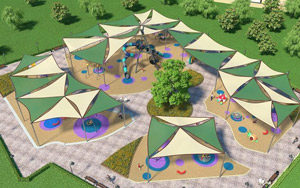 An architectural rendering of the proposed park.

JERUSALEM (JTA) — Donald Trump thanked the mayor of an Israeli city who named a new park after him. In a letter dated Dec. 13, Trump expressed gratitude for the gesture and satisfaction that Israelis welcomed his recognition of Jerusalem as the capital of their country — which apparently earned him the honor.

A week earlier, David Even Tzur, the mayor of the Haifa suburb Kiryat Yam, in northern Israel, said he would establish Donald Trump Park in appreciation of the president’s Jerusalem announcement the day before.

“Thank you for this great honor,” Trump wrote in his letter. “It was a distinct pleasure to visit Israel during my first international trip as President of the United States. … I am thankful for your gesture and am moved to know that the people of Israel are encouraged by my decision to recognize Jerusalem as the capital of Israel.”

Trump also called Israel “one of our most steadfast allies and an oasis of hope, democracy, and prosperity in the Middle East.”

Tzur said Trump “took a brave and unprecedented step that none of his predecessors were willing to take and we must honor him for it.”

“Jerusalem is a dream that is present in every Jew’s heart,” the mayor said, “and Trump’s decision gives this dream clear international recognition.”

Tzur added that he is looking into the possibility of inviting Trump to the opening of the facility, which is slated for April.

U.S. recognition of Jerusalem was welcomed in Israel and much of the Jewish community but rejected by much of the world. Palestinians have rioted against the decision, leading to numerous deaths and injuries, and throwing Trump’s Middle East peace initiative into question.

Time For a Reckoning? Nazi hunters recommend nine for prosecution
Israeli consulate in Atlanta, five embassies to close next year