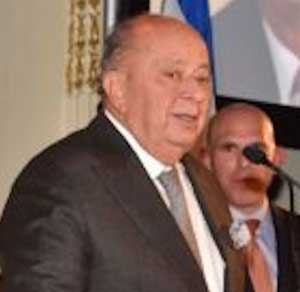 By MARCY OSTER
NEW YORK CITY (JTA) – Donald Trump will attend a private fund-raiser at the New Jersey home of a close friend who died of the coronavirus in April.

The news website Yeshiva World News first reported about the location of the Aug. 9 fund-raiser and included an image of the invitation.

Details of where the fund-raiser will be held are provided upon RSVP, according to the invitation. Yeshiva World News identified the location as the Chera home.

Donations range from $250,000 to meet Trump at a roundtable, have a photo op and attend a reception with the president to $5,600 to attend the reception.

The family hosted a Trump fund-raiser when he was running for president in 2016.

Trump said in a White House briefing in March that Chera brought the dangers of COVID-19 home to him.

“When you send a friend to the hospital, and you call up to find out how is he doing — it happened to me, where he goes to the hospital, he says goodbye,” Trump said during a White House briefing, referring to Chera. “He’s sort of a tough guy. A little older, a little heavier than he’d like to be, frankly. And you call up the next day: ‘How’s he doing?’ And he’s in a coma? This is not the flu.”