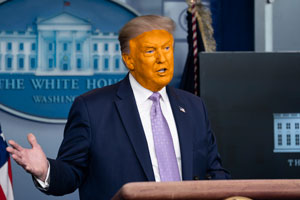 (JNS) – Donald Trump vowed that if re-elected in November, there would be a new deal with Iran “within four weeks.”

“When we win, we will have a deal within four weeks,” he said in leaked footage from a fund-raiser on Sunday at the New Jersey home of the late Syrian-Jewish leader Stanley Chera, a real estate developer and friend of the president who died in April at the age of 77 due to complications from coronavirus.

Trump withdrew the United States in May 2018 from the 2015 Iran nuclear deal, reimposing sanctions lifted under it, along with enacting new penalties against the regime. The presumptive 2020 Democratic presidential nominee, former U.S. Vice President Joe Biden, has repeatedly said that, if elected, the United States would re-enter the deal if and when Iran returns to compliance.

China and Russia, who, like the United States, have a permanent veto on the Security Council, are expected to veto the measure—a move that the Trump administration has said would result in enacting snapback sanctions under the deal, which would include extending the arms embargo indefinitely.

Myth vs. fact: Are today’s Jews the descendants of ancient Israelites?
Beth Emeth Sisterhood’s monthly book club to continue to stream through December