Trump’s executive order on anti-Semitism is not perfect, but it’s still good for the Jews 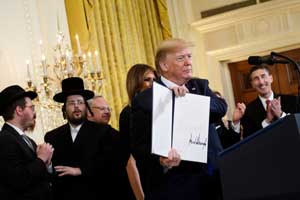 President Donald Trump shows an executive order regarding anti-Semitism during a Chanukah reception at the White House, Dec. 11, 2019. Photo courtesy of Brendan Smialowski/AFP via Getty Images.

By Rabbi ANDREW BAKER
WASHINGTON (JTA) – It is unfortunate that proposed legislation that enjoyed broad, bipartisan support fell victim to the hyperpartisan climate of Washington. Now enacted by a presidential executive order, and signed at a White House Chanukah party in the presence of mostly Republican friends and supporters, what had been known as the Anti-Semitism Awareness Act will make an important but modest contribution to addressing the problem of anti-Semitism on the nation’s college campuses.

This executive order calls upon the U.S. Department of Education to take into consideration the International Holocaust Remembrance Alliance (IHRA) working definition of anti-Semitism when determining if Jewish students are facing hostility or discrimination. Under Title VI of the U.S. Civil Rights Act, which prohibits discrimination on the basis of race, color or national origin by recipients of federal funds, the Department of Education has the authority and responsibility to take steps, including the withholding of federal funds, if the schools do not address these problems.

Because Title VI does not bar discrimination on the basis of religion (as many colleges are themselves religiously based), it has been determined that Jews (and Muslims and Sikhs, for example) are covered by identifying them as having shared ethnic characteristics. This is referenced in the executive order. It is not, as some critics have charged, some new step by the Trump administration to redefine Judaism as a nationality rather than a religion. It merely restates what has already been the standard practice since the Obama administration. Without it, Title VI wouldn’t be able to address anti-Semitism in any form.

Still, if the Department of Education is to examine and evaluate the presence of anti-Semitism on a college campus, it ought to know what it is. Anti-Semitism can appear in various forms — as hatred and discrimination against Jews, through stereotypes and conspiracy theories, as Holocaust denial and, more recently and most controversially, in ways relating to the State of Israel. Hence, the recommendation to “consider” using the IHRA definition, which offers clear examples of all these forms.

I was part of a small team of experts and advocates that worked 15 years ago with the European Monitoring Centre on Racism and Xenophobia, or EUMC, to draft and employ the definition. At the time, when anti-Semitic incidents surged throughout Western Europe, the EUMC monitors themselves had no clear or common definition of anti-Semitism. The definition was developed to help governments understand the nature of the problem so they would be better able to combat it.

Much attention then and today has focused on examples in the definition relating to Israel. There have been situations in Europe where Jews are held responsible and even physically targeted for the perceived misdeeds of Israel. We also have seen examples where someone merely substitutes “Zionist” for “Jew” and thereby claims the most obvious of anti-Semitic statements is a form of acceptable “political” speech. There is general agreement that these are forms of anti-Semitism and should be condemned.

More difficult may be the accusations directed at the State of Israel itself — calling it a racist state, drawing analogies to the Nazis or holding it to unfair double standards. These are largely rhetorical, which lead critics of the working definition and the executive order to claim they will stifle free speech on campus.

They may. Even the most useful tools can be misused, and guarding against it will be imperative.

There is no clearly defined line where all might know that extreme animus toward Israel has become more than criticism and instead is now a form of anti-Semitism. But it happens. Take the example of British Labour leader Jeremy Corbyn, whose extreme anti-Zionism is understood by the vast majority of British Jews — and many non-Jews — to be only a thinly disguised form of anti-Semitism.

In America, free speech and hate speech are not mutually exclusive. Racist, homophobic and anti-Semitic speech may be protected by the First Amendment, but they have consequences. In particular, and within the narrowly defined contours of Title VI, the presence of hate speech can contribute to a hostile climate or a pattern of discrimination against any protected minority group. It’s not proof in and of itself, but it must be considered. Thus, a comprehensive definition of anti-Semitism can be a useful tool in determining if and when an extreme anti-Israel environment on campus undermines the security and well-being of Jewish students.

Of course, there are serious and lethal threats from other sources, as seen in attacks on our nation’s synagogues and in a kosher market. Critics of the executive order have rightly noted that it does nothing to address this problem. But, however flawed the messenger may be, we should be clear-eyed and objective when evaluating the message. While many of us may have preferred congressional legislation to an executive order, the results are the same.

Opinion: Stephen Colbert an anti-Semite?
Survivor dies from injuries after being dropped in transit to White House Chanukah party