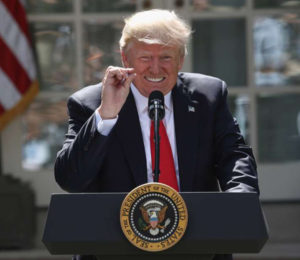 By Mark Langfan
Israelnationalnews.com
While many pundits have gone hysterical over Donald Trump’s Syrian pullout, Trump really had no choice but to employ his own “Samson Option,” one in which he knocked over everyone’s toys and theories.

Firstly, Trump isn’t “gifting” Putin a “Christmas present,” but rather is hanging a deadly Syrian Albatross on Putin’s neck.  Without American forces east of the Euphrates and American dollars helping Syrian reconstruction, Putin faces an Iranian victory in Syria, and a Russian loss.  In fact, Russian rapprochement with Israel is a direct result of American withdrawal.  Now, Russia has only Israel to help keep Iran’s gobbling up of Syria in check.  If Putin looks to Turkey to check Iran, the unacceptably high payment will be Turkish ownership of Northern Syria.

Putin is now hopelessly up a Syrian creek without a paddle.