Tu B’Shevat: Time to plant a tree or two! 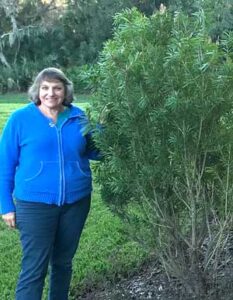 Marilyn and her husband recently planted this bottlebrush tree.

By MARILYN SHAPIRO
“See to it that you do not spoil and destroy My world; for if you do, there will be no one else to repair it” (Midrash Kohelet Rabbah, 1 on Ecclesiastes 7:13)

Would you like to celebrate Tu B’Shevat( Feb.9-10) in a meaningful way? Plant a tree—or two—or be part of the Trillion Tree Campaign. No matter how many you plant, you will be doing your part for the environment.

Facing the Threat
Although there are still doubters, climate change is a real threat to our future. According to the United Nations’ Intergovernmental Panel on Climate Change, the world has 11 years to take dramatic policy action and shift away from fossil fuels to avoid the worst effects of climate change.

In his 2019 book Falter: Has the Human Game Begun to Play Itself Out? Bill McKibbon describes the present as a bleak moment in human history — and we’ll either confront that bleakness or watch the civilization our forebears built slip away. Okay, that information gives me nightmares!

I can despair, or I can take action. As Jew, I am called to the social justice theology of Tikkun Olam, the perfecting or the repairing of the world. This principal keeps me strongly anchored to my religion. Full disclosure: When I attend services, I love the music and the flow of the prayers. Often, however, prayers that praise God are not as important to me as prayers that call me to action. Some holidays seem to call me to action more than others. Tu B’Shevat is one of them.

Long before the first Earth Day in 1971, long before the first American Arbor Day was held in Nebraska in 1872, and long before the Spanish village of Mondoñedo held its first arbor plantation festival in the world in 1594, Jews celebrated Tu B’Shevat .The holiday was based on the date chosen for calculating the agricultural cycle of taking tithes from the produce of the trees, which were brought as first-fruit offerings to the Temple in Jerusalem. Although the holiday fell out of practice after the destruction of the Second Temple, kabbalists in the Middle Ages revived the holiday, adding the practice of holding a seder in which biblical foods, including wheat, barley, grapes, figs, pomegranates, olives, and dates, are eaten.

For those of us who care deeply about the future of our planet, Tu B’Shevat offers a Jewish connection to contemporary ecological issues. Many modern Jews view the holiday as the opportunity to educate fellow Jews and others about the Jewish tradition of advocacy and responsible stewardship of God’s creation.

Ecological Activism
One such way is to plant trees. Many American and European Jews observe Tu B’Shevat by contributing money to the Jewish National Fund (JNF), an organization devoted to reforesting Israel. Founded in 1901 to buy and develop land in what was then the Ottoman Palestine, the JNF has planted over 240 million trees in Israel along with other environmental achievements including the building and development of dams, reservoirs, and parks.

Making A Difference
According to a recent study released by Dr. Thomas Crowther and fellow scientists at ETH Zurich, a Swiss University, planting billions of trees across the world is one of the biggest and cheapest ways of taking CO2 out of the atmosphere to help tackle the climate crisis. As trees grow, they absorb and store the carbon dioxide emissions that are driving global heating. New research estimates that a worldwide planting program could remove two-thirds of all the emissions from human activities that remain in the atmosphere today.

According to Crowther, the impact of planting billions of trees across the world is “mind-blowing.” one of the biggest and cheapest ways of taking CO2 out of the atmosphere to tackle the climate crisis. Best of all, it is “available now, it is the cheapest one possible and every one of us can get involved.”

In January 2020, members of the World Economic Forum, which was held in Davos, Switzerland, announced the creation of 1t.org, aimed to unite and promote reforestation efforts worldwide. It joins several other established initiatives including the UN Decade on Ecosystem Restoration 2021 -2030; the Bonn Challenge, Trillion Trees Initiative, and the Global Partnership on Forest and Landscape Restoration.

Even President Trump, while a skeptic about climate change, has signed on, stating that he wants to show “strong leadership in restoring, growing and better managing our trees and our forests.”

I am not naive enough to believe that my making contributions to JNF or other agencies committed to reforestation will single-handedly solve the climate crisis. I will do my best to further reduce my carbon footprint by driving a hybrid car, bundling errands that require driving to use the least amount of fuel, and using energy-efficient appliances and light bulbs. I will continue to recycle despite changes in recent policies in many areas that limit what we can put in our bins. (I still feel guilty every time I throw plastic and glass containers in the garbage!) I will continue to read, study, write and advocate for the environment. And I will vote for politicians who share my concerns for our planet.

“It’s the little things citizens do. That’s what will make the difference,” stated Wangari Maathai, who won the Nobel Peace Prize in 2004 for her environmental efforts. “My little thing is planting trees.”

If we can choose to do our own “little thing,” we may be able to keep our planet healthy. After all, as expressed in a popular meme, “There Is No Planet B. “

Readers may find these web pages informational and useful if they too wish to be involved with a Tu B’Shevat  ecological effort.

Marilyn Shapiro, formerly of Clifton Park, is now a resident of Kissimmee, Fla. A second compilation of her articles printed in The Jewish World has been published. Tikkun lam now joins There Goes My Heart. Marilyn Shapiro’s blog is theregoesmyheart.me.