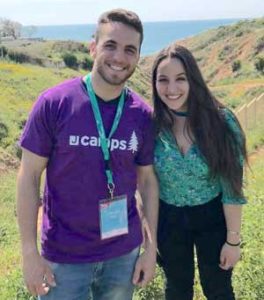 Emissaries: Dvir Gvilli, left, and Gai Bouzaglo have joined the Schenectady JCC for the summer to share Israeli culture and interact with campers.

SCHENECTADY– Israeli emisaries, Dvir Gvilli and Gai Bouzaglo, are working with Schenectady Jewish Community Center (SJCC) campers and staying with Center members as they share their culture and experiences as Israelis.

Gvilli is a 20-year-old from Rishon LeTsiyon and is participating in his first summer camp experience at the SJCC. He has a brother Kobi, 26, and sister Shiran, 30. In his spare time Gvilli surfs and plays guitar. While in the Israeli Army, he was a  military band leader. He  has indicated that he is most excited about taking field trips with the campers this summer and experiencing what this region has to offer.

Bouzaglo of Ma’alot-Tarshiha returned to the Center for her second summer. She reports that she looks forward to again teaching campers about her culture and that she enjoys how eager campers are to learn about Israel. When Bouzaglo isn’t at camp she enjoys singing and playing guitar. She has two younger siblings, a sister, Roni and a brother, Yair. While in the Israeli Army, Bouzaglo served as a commander.

“Welcoming Dvir and Gai at camp this year is an absolute pleasure as it allows our campers to learn firsthand about Israeli culture and gives them new opportunities that enhance their experiences at camp,” said SJCC Interim Executive Director, Andy Katz. “We are fortunate to have this opportunity to learn from them as they interact with our campers as well as our members.”

Gvilli and Bouzaglo will stay with the Cohen, Epstein, Holland, Leighton, Paludi and Polk families members of the SJCC. Gvilli will be a counselor for Tween Camp, which features day trips and overnight trips throughout the area. Bouzaglo will work with campers at Camp Chaverim, the Center’s day camp. The Center’s Israeli emissaries will also present an in-depth Israel focus during the Center’s post camp week, “Israel to the Max.”