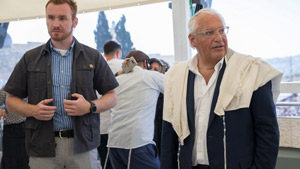 (JNS) – A whopping 100,000 people made pilgrimage to the Old City of Jerusalem on Monday, April 2, for a twice-annual mass blessing by the Kohenim—Jewish people descended from the biblical Aharon and designated as priests. Among those was U.S. Ambassador to Israel David Friedman.

The mass “Priestly Blessing” ceremony, for which Jews travel from throughout Israel—and sometimes, from around the world—only happens on the holidays of Passover and Sukkot. Though the blessing was historically given at the Temple, the Western Wall plaza is now the closest available site due to Jordan’s control over the Temple Mount.

On Monday morning, male descendants of the Kohenim priestly caste, raised their hands beneath their prayer shawls and blessed attendees with the special blessing prescribed by Aharon to be given to the Jewish people: “May God bless you and protect you. May God shine His countenance upon you and be gracious to you. May God turn His countenance toward you and grant you peace.” (Numbers 6:24-26)

Friedman was one of hundreds of Kohenim who gave the blessing, and told Kan news that he was accompanied to the event with his son and grandson, who also participated in giving the blessing.

Friedman told Arutz Sheva that his participation was especially meaningful to him because of U.S. President Trump’s recognition of Jerusalem as the capital of Israel.
“It’s especially meaningful to be here this year, after the president recognized Jerusalem as the capital of Israel and as we’re getting ready to move the embassy to Jerusalem,” said Friedman.

He also spoke about the recent Arab riots at the Gaza border, stressing that “what I’ve seen is something very different than peaceful protests—very dangerous activity, rushing the border, throwing Molotov cocktails, burning tires, putting women and children on the front lines.” He warned, “I think it’s not in the interests of the Palestinians for that to continue.”

Also in attendance at the ceremony were Chief Ashkenazi Rabbi of Israel David Lau and Chief Sephardic Rabbi of Israel Yitzhak Yosef, as well as Rabbi of the Western Wall Shmuel Rabinovitch.