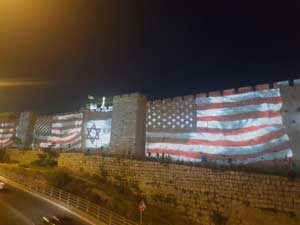 The city of Jerusalem marked the first anniversary of the relocation of the U.S. embassy to Israel’s capital, and illuminated the walls of the Old City and the Chords Bridge in the colors of the American flag, May 14, 2019. Photo courtesy of the Jerusalem Municipality.

(JNS) – Donald Trump and Israeli Prime Minister Benjamin Netanyahu celebrated one year since the U.S. relocated its embassy in Israel from Tel Aviv to Jerusalem on May 14, 2018.

“Today marks the one-year anniversary of the opening of the United States Embassy in Jerusalem, Israel. Our beautiful embassy stands as a proud reminder of our strong relationship with Israel, and of the importance of keeping a promise and standing for the truth,” tweeted Trump.

At a ceremony marking the occasion, Netanyahu provided a greater picture about Israel’s alliances, especially with the United States, in having a mutual goal to combat one of the world’s biggest geopolitical threats: Iran. “There is a new efflorescence, a new renaissance of relations between us and many of our Arab neighbors, and many non-Arab Muslim countries,” he said. “Many more than you can think.”

“And it’s true we are united in our desire to stop Iranian aggression. Israel and all the countries of the region and all the countries who seek peace in the world should stand together with the United States against Iranian aggression,” he continued. “We have to keep on strengthening the State of Israel and keep on strengthening he indispensable alliance with the United States.

Larry will be 71 and so will Israel! Bonding with Israel still seems like a good investment!
Does ‘Hamilton’ get Hamilton right? theme for North Country Jewish Federation event