Want to influence Israel? The ongoing Zionist Congress election is your chance 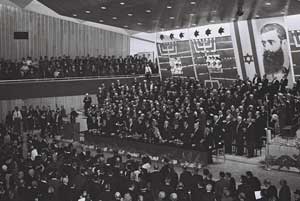 The opening of the 26th World Zionist Congress in Jerusalem in 1964. Photo courtesy Pridan Moshe/GPO.

By JONATHAN S. TOBIN
(JNS) – Left-wing critics of Israel think that they’ve finally found a way to make the voices of Americans who disdain the policies of Israel’s current government heard. People like writer Peter Beinart, J Street leader Jeremy Ben-Ami, American Federation of Teachers president Randi Weingarten and other activists representing a broad array of liberal groups are all agreed that trying to get elected to the upcoming 38th World Zionist Congress will provide them with a path to stopping funding for Jewish settlements in the West Bank and promoting a two-state solution to the ongoing conflict with the Palestinians.

They’re right about the importance of the Zionist Congress and the way it gives diaspora Jewry a voice that can help influence Israel’s future.

Hatikvah, the name of the slate led by Beinart and company, is just one of 15 such groups vying for the votes of American Jewry in an online election that will be held between Jan. 21 and March 11. The others represent the leading religious denominations, as well as groups dedicating to supporting Sephardi Jewry, Russian Jews, Israeli expats and those with a more political point of view, such as the slate of the Zionist Organization of America and its allies as well as others purporting to represent centrist or right-wing ideas.

At stake in this vote is the composition of the American delegation to the Congress (it meets every five years) that will gather in Jerusalem later this year. The 152 Americans elected will make up 29 percent of the delegates with those representing the rest of the diaspora getting another third of the slots. Israelis will make up 38 percent of those in attendance, and those seats will be allocated to that country’s political parties according to the results of the March 2 Knesset election.

Allocation Of Monies
As is the custom in Israeli elections, those seeking election are part of lists whose members will gain seats in proportion to their share of the vote, like Knesset elections.

The important thing to remember about all this is that the Zionist Congress is not a Jewish version of high school model Congress or United Nations. When it meets, the Congress will elect officials who will decide on the leadership of the World Zionist Organization, as well as the board of the Jewish Agency for Israel, the United Israel Appeal and the Jewish National Fund. These bodies help determine the allocation of more than $1 billion to be spent on development projects in Israel, including in the territories, as well as education in the diaspora.

In effect, this means that Americans voting in the Zionist Congress election have a chance to influence the decisions these bodies make on issues that are vital to Israel and the Jewish future.

For those who complain that Israel doesn’t listen to diaspora Jewry, the election is an opportunity for American Jews to be heard. Just as important—and unlike the way that most of the organized Jewish world works—it won’t just be people who give the most money who will wind up having a say. The Congress election is open to anyone over 18 who is Jewish and willing to affirm their support for Zionism’s Jerusalem Platform, and pay a fee of $7.50 for the right to vote (those under 25 pay $5) and can participate and cast a ballot for one of the factions running.

Unfortunately, that is a message that hasn’t gotten through in previous campaigns. In 2015, only 56,737 Americans voted. That’s a pitiful turnout when you consider that no matter how you are counting the number of Jews—and for the purposes of voting for the Congress, no one is subjected to a test for the claim of Jewish identity—they number anywhere from 4 million to 7 million. While that shouldn’t be interpreted as hostility to Zionism since polls show the majority of Americans still have affection for Israel, it does demonstrate the minimal interest they have in Zionist groups.

As has been the pattern with the last several Zionist Congresses, in 2015 the American vote was dominated by those affiliated with religious denominations. ARZA (Reform Judaism) and Mercaz (Conservative Judaism) together won a majority of the delegates from the United States with the next highest total going to Modern Orthodox Zionists. The rest of the votes were scattered among various groups, such as the expressly political slates like Hatikvah and the ZOA, which only won a relative handful of delegates each.

American delegations to past Congresses, which were largely made up of those representing the non-Orthodox denominations, have lined up with left-wing Israeli parties. But they have primarily used their platform to ineffectually advocate for more religious pluralism in Israel.

Voting For A Jewish Future
But this time around, groups like Hatikvah are trying to get Americans to vote their politics as opposed to their synagogue affiliation. Whether or not they or their right-wing counterparts succeed, the renewed attention given the Zionist Congress is encouraging.

It may be that if more Americans vote in the Congress elections, they will produce, as people like Beinart hope, a delegation that will reflect the liberal Democratic affiliations of the majority of Jews. But anything that will motivate more Jews to read and declare their support for a platform that affirms that Israel should be a Jewish, Zionist and democratic state, in addition to “the unity of the Jewish people, its bond to its historic homeland Eretz Yisrael and the centrality of the State of Israel and Jerusalem, its capital, in the life of the nation,” is a very positive development.

So no matter which slate you prefer, it’s imperative that as many Jews as possible register and vote for the Jewish future. As is the case with general elections in the United States, if you don’t bother to vote, then don’t complain later that no one listens to you.