What does John Bolton’s departure mean for Israel? 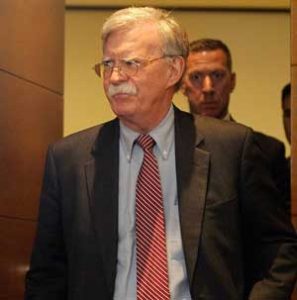 By RON KAMPEAS
WASHINGTON (JTA) – Benjamin Netanyahu had quite a Tuesday, Sept. 10.

One week before Israelis go to the polls in their country’s second election this year, the Israeli prime minister went on live television with a promise that if re-elected, he is prepared to annex sensitive areas of the West Bank in “maximum coordination” with President Donald Trump. Netanyahu cited the U.S. leader’s “great faith in our friendship.”

Which Policies?
Literally minutes later, Trump dropped a bombshell on Twitter with his announcement that he had requested the resignation of one of Israel’s closest allies in the White House and a leading proponent within the administration of a hardline against Iran: National Security Adviser John Bolton.

Worse, Trump said he was dumping Bolton because the two had “strong disagreements” on policy. Worse still, Trump’s secretary of state confirmed that the president was ready to meet with the president of Iran without preconditions.

The most immediate source of disagreement between Bolton and Trump appeared to be Afghanistan. Bolton reportedly was trying to hold back Trump from leaping into a peace agreement with the Taliban, and his pressure was said to be behind the scrapping of a meeting that had been set at Camp David to announce the deal.

Israel’s Interests
But there were other tensions closer to Israel’s interests. Bolton has spearheaded American efforts to isolate Iran and pressed for a military response to the downing by Iran of an American drone over the summer — a strike that Trump approved and then abruptly called off.

Then last month, Netanyahu reportedly scrambled to intervene after reports emerged of a possible meeting between Trump and Javad Zarif, the Iranian foreign minister, who made a surprise appearance at the G7 meeting in France.

Secretary of State Mike Pompeo, speaking Tuesday afternoon at a hastily convened news conference to tamp down speculation about Bolton’s firing, said Trump was open to meeting with Iranian President Hassan Rouhani on the sidelines of the upcoming U.N. General Assembly.

“Sure, the president’s made very clear, he’s prepared to meet with no preconditions,” Pompeo said.

The Iranians, meanwhile, were cheering Bolton’s departure, with Hesameddin Ashena, an adviser to Rouhani, tweeting that it was a “decisive sign of the failure of the U.S. maximum pressure strategy” toward Iran.

Israelis fear a Trump-Rouhani meeting would play out much like the summits between Trump and North Korean leader Kim Jong Un in which the president trumpets his closeness with the autocratic leader even as North Korea’s arms testing continues.

Radical Change?
Just hours before his departure, Bolton posted on Twitter: “Now that we’re two weeks from the U.N. General Assembly you can be sure Iran is working overtime on deception.”

Danielle Pletka, a vice president at the American Enterprise Institute, where Bolton also worked in the years he was not in government, cautioned against perceiving Bolton’s departure as a signal of a radical change in Israel policy. Others in the administration, including Pompeo and Jared Kushner, a senior adviser to the president and Trump’s son-in-law, are as pro-Israel as Bolton, Pletka said.

“I don’t think John Bolton is the author of Israel policy,” Pletka said.

Pompeo made a similar point at his news conference, saying that not too much should be read into Bolton’s departure.

“I don’t think any [world] leader should make the assumption that just because any one of us departs that [Trump’s] foreign policy is any different,” Pompeo said.

But a broader concern for Israel could be the reinforcement of Trump’s isolationist tendencies. Bolton was often seen as agitating for a more robust American military posture, a tendency Trump has resisted.

For decades, Israeli leaders have seen U.S. policy through two filters: the specifics of the bilateral alliance, including financial and other assistance to Israel, and the global projection of American power, which devolves on to Israel as one of its closest allies.

On the former, Trump is seen as an overall improvement over his predecessors, taking steps like moving the U.S. Embassy to Jerusalem, recognizing Israel’s claim to the Golan Heights and encouraging Sunni Arab states to ally with Israel even absent progress toward a peace agreement with the Palestinians.

On the second, the Bolton firing raises concerns.

“There are people in the president’s inner circle who disagree with American global leadership,” Pletka said. “There are people inside the White House who think defense spending and foreign aid are money wasted and we should deal with things at home.”

Compounding concerns was the bitter tone of Bolton’s departure.

On Twitter, Bolton contradicted Trump and insisted he had quit. Pompeo and Steve Mnuchin, the Treasury secretary, both took shots at Bolton, with Mnuchin citing Bolton’s backing for the 2003 Iraq War as one of the reasons for his firing — as if that was not evident when Bolton became national security adviser in 2018.

Bolton’s proxies fired back. CNBC quoted a “source close to Bolton” as saying, “Since Ambassador Bolton has been national security adviser over the last 17 months, there have been no bad deals.”

Notably, Bolton got a fond farewell from the Republican Jewish Coalition, a group that has otherwise enthusiastically embraced the Trump presidency in the last year.

“Thank you for your longstanding friendship, moral clarity and passionate defense of America and our allies, especially Israel,” RJC Executive Director Matt Brooks said on Twitter.

Democrats were ready to pounce on an administration that has seen significant turnover in its upper ranks. Bolton was Trump’s third national security adviser in less than three years.

“This national security — and cabinet — turnover is unprecedented and a clear sign of Trump’s failed leadership, domestically and in the world,” Halie Soifer, the executive director of the Jewish Democratic Council of America, said on Twitter. “It also indicates the incoherence and danger of Trump’s erratic foreign policy.”