What If: Fifty Years After the Six-Day War 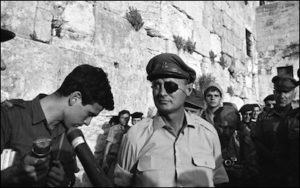 The symbol of victory: Moshe Dayan (with eye patch) at the Western Wall in Jerusalem, June 1967.

Originally published under the title “Fifty Years After the Six-Day War.”

Israel’s military triumph over three enemy states in June 1967 is the most outstandingly successful war of all recorded history. The Six-Day War was also deeply consequential for the Middle East, establishing the permanence of the Jewish state, dealing a death-blow to pan-Arab nationalism, and (ironically) worsening Israel’s place in the world because of its occupation of the West Bank and Jerusalem.

Focusing on this last point: how did a spectacular battlefield victory translate into problems that still torment Israel today? Because it stuck Israelis in an unwanted role they cannot escape.

First, Israeli leftists and foreign do-gooders wrongly blame Israel’s government for not making sufficient efforts to leave the West Bank, as though greater efforts could have found a true peace partner. In this, critics ignore rejectionism, the attitude of refusing to accept anything Zionist that has dominated Palestinian politics for the past century. Its founding figure, Amin al-Husseini, collaborated with Hitler and even had a key role in formulating the Final Solution; recent manifestations include the “anti-normalization” and the boycott, divestment, and sanction (BDS) movements. Rejectionism renders Israeli concessions useless, even counterproductive, because Palestinians respond to them with more hostility and violence.

Second, Israel faces a conundrum of geography and demography in the West Bank. While its strategists want to control the highlands, its nationalists want to build towns, and its religious want to possess Jewish holy sites, Israel’s continued ultimate rule over a West Bank population of 1.7 million mostly hostile Arabic-speaking, Muslim Palestinians takes an immense toll both domestically and internationally.

Various schemes to keep the land and defang an enemy people – by integrating them, buying them off, dividing them, pushing them out, or finding another ruler for them – have all come to naught.

In combination, these led to a long-term demographic and housing competition that Palestinians are winning, jeopardizing the Jewish nature of the Jews’ historic capital. Worse, 300,000 Arabs could at any time choose to take Israeli citizenship.

These problems raise the question: Had Israeli leaders in 1967 foreseen the current problems, what might they have done differently in the West Bank and Jerusalem? They could have:

And today, what can Israelis do? The Jerusalem issue is relatively easy, as most Arab residents have not yet taken out Israeli citizenship, so Israel’s government can still stop this process by reducing the size of Jerusalem’s 1967 borders and terminating the offer of Israeli citizenship to all the city residents. Though it may lead to unrest, cracking down on illegal housing sites is imperative.

The West Bank is tougher. So long as Palestinian rejectionism prevails, Israel is stuck with overseeing an intensely hostile population that it dare not release ultimate control of. This situation generates a vicious, impassioned debate among Israelis (recall the Rabin assassination) and harms the country’s international standing (think of U.N. Security Council Resolution 2334). But returning to 1949’s “Auschwitz lines” and abandoning 400,000 Israeli residents of the West Bank to the Palestinians’ tender mercies is obviously not a solution.

Instead, Israel needs to confront and undermine Palestinian rejectionism, which means convincing Palestinians that Israel is a permanent state, that the dream to eliminate it is futile, and that they are sacrificing for naught. Israel can achieve these goals by making victory its goal, by showing Palestinians that continued rejectionism brings them only repression and failure. The U.S. government can help by green lighting the path to an Israel victory.

Only through victory can the astonishing triumph of those six days in 1967 be translated into the lasting solution of Palestinians accepting the permanence of the Jewish state.