What is causing the spike in anti-Semitic attacks in Brooklyn? 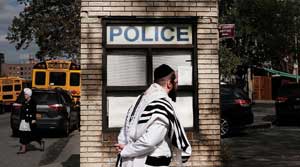 By BEN SALES
NEW YORK CITY (JTA) – Days after a series of attacks against Jews across Brooklyn, the Anti-Defamation League announced that it would double funding for a school program combating hate.

But city officials say more than education is needed to stop the rash of attacks, which have spiked across this city in 2019. That’s because the problem is hard to diagnose.

Is it the local effect of a national rise in anti-Semitism? The resurfacing of old resentments? Are Jews being scapegoated for the impact of gentrification? Is the persistent influence of anti-Semitic leaders to blame? Or is it just kids acting out?

An Urgent Problem
“We need a much more aggressive approach,” said Devorah Halberstam, whose son was killed in a terrorist attack on the Brooklyn Bridge in 1994 and now serves as director of external relations at the Brooklyn Children’s Museum.

At a news conference Tuesday, Nov. 12, in Brooklyn to announce the new ADL initiative, New York City officials were candid about the urgency of the problem.

On Friday night, surveillance video captured a man throwing a brick through the window of a Chasidic girls’ school in Crown Heights. On the same night in the Borough Park neighborhood, at least three identifiably Orthodox men were punched by assailants. Also in Borough Park, multiple Orthodox Jews in Borough Park had eggs thrown at them over the weekend.

Also on Friday, a 16-year-old boy turned himself in to police and was arrested in connection with at least three attacks on Jews. He was charged with two counts of aggravated harassment.

“The uptick in hate crimes in this borough is a blemish on this entire city and this entire country, and it’s a blemish that we’re not going to live with,” Borough President Eric Adams said at the news conference. “And I’m saying to the men and women of the police department: We cannot ignore the crimes. We have to report them they way they are. We can’t sugarcoat it.”

Ignorant Teens?
Anti-Semitic incidents in the city have increased significantly this year, according to data from the New York Police Department. Through September, there have been 163 reported incidents, up from 108 over the same period last year — an increase of 50 percent. Anti-Semitic incidents make up a majority of reported hate crimes in New York City.

In September, the mayor’s office announced that it had hired Deborah Lauter, a former ADL executive, to head its new Office for the Prevention of Hate Crimes.

At the news conference, Brooklyn District Attorney Eric Gonzalez said the recent attacks were mostly committed by teenagers who may not understand the gravity of, for example, egging a Chasidic family or drawing a swastika on a building.

Anti-Bias Education
“I think ignorance breeds hate, so therefore education is critical to battling bigotry and anti-Semitism, especially among young people,” Gonzalez said. “It’s a lot harder to select someone, to hate them, if you know them, if you’ve learned about their culture.”

The increased funding for the ADL’s anti-bigotry program aims to address that aspect of the problem. The ADL will now spend $250,000 on No Place for Hate in Brooklyn, which will allow the program to be implemented in up to 40 schools across the borough this academic year, up from 22 at present. The expansion will focus on Crown Heights and Borough Park, along with the Williamsburg neighborhood — they have large Orthodox Jewish populations and have experienced anti-Semitic incidents in recent months.

No Place for Hate was launched in 1999 and has been implemented in 1,600 schools nationwide. It requires participating schools to form a student committee on fighting hate, have students sign a pledge against bullying and discrimination, and run an anti-bias or anti-bullying program.

“To stop hate, we cannot just arrest our way out of the problem, we have got to change hearts and minds,” ADL CEO Jonathan Greenblatt said at the news conference. “It is so important to focus on children so we can inoculate the next generation from intolerance, so we can immunize them against anti-Semitism and all forms of hate.”

Evan Bernstein, the ADL’s New York regional director, says kids in the city are learning to hate from a mix of influences, including parents who might have lived through the 1991 Crown Heights riots, which began after a black boy was killed accidentally by a car escorting Menachem Mendel Schneerson, the late head of the Chabad-Lubavitch Chasidic movement, which is headquartered in the neighborhood. The death touched off three days of rioting in which black youths attacked religious Jews, killing one.

Lack Of Authority
But Rabbi Eli Cohen, executive director of the Crown Heights Jewish Community Council, told JTA that he believes the influence of anti-Semitic leaders is a lot weaker now than it was in the 1990s. Leaders of the African-American community in Crown Heights are partners in stopping anti-Semitism, said Cohen, who attributes the rise in attacks to a general anti-police sentiment.

“What’s going on right now is that authority is breaking down a little, and people are feeling emboldened to defy authority,” said Cohen, who also has run educational programs about the Jewish community in local schools. “Kids that want to act out feel there’s nothing holding them back anymore.”

Pastor Gil Monrose, who leads a church in Crown Heights and serves as the borough president’s director of faith-based and clergy initiatives, pointed to gentrification as a driver of increased attacks on Jews. As rising housing prices draw in newcomers and push out some longtime residents, locals may become frustrated and seek a scapegoat. Monrose also noted that overall crime levels are high in Crown Heights.

“We’re living in a community with Jewish individuals, African-Americans, Caribbean individuals, you will find there is an uptick because they don’t understand the culture of the other,” Monrose told JTA. “It’s because all of us live together and seeing, well, they are the other way from us, they live differently, let’s try to do something to them. It’s going up because everyone is living on top of each other.”

Visability
Bernstein noted that some landlords in the borough are Orthodox, including some on lists of the worst landlords in New York City, which can breed anti-Semitic stereotypes.

Several officials said that Orthodox Jews are bearing the brunt of a rising climate of anti-Semitism because they appear visibly Jewish and become obvious targets for those who want to hurt Jews.

“People with hate in their heart are specifically targeting this population because they know that here is a person of Jewish faith,” Adams said.

DC Report: Differences feared; anger and hate seem to be on the upswing
Backlash to EU court ruling requiring labeling of products