By RABBI DONNA KIRSHBAUM, RABBI RICHARD HIRSH
(JTA) – “I have ordered the men not to molest you.” (Ruth 2:9)

With these words, Boaz, the wealthy landowner, tells Ruth, the destitute Moabite, a stranger in Bethlehem, that she is not only free to glean in his fields and to gather what the reapers may drop, but that she will be safe while doing so.

Although Ruth does not work for Boaz, her situation is not unlike that of women today who depend for their livelihoods on men with power. As such, the Book of Ruth, which is read on Shavuot, the Jewish festival that begins Saturday night, June 8, offers some valuable insights about correcting for these imbalances of power when livelihoods are at stake.

Ruth’s story offers a narrative example of a Torah law about gleaning. The Torah teaches that “when you reap the harvest of your land, you shall not reap all the way to the edges of your field, or gather the gleanings of your harvest. You shall not pick your vineyard bare, or gather the fallen fruit of your vineyard; you shall leave them for the poor and the stranger.” (Leviticus 19:9-10)

While this imperative allows the vulnerable and needy to reap a modicum of sustenance, the Torah gives no indication of whether such an act should be done graciously or grudgingly –or even if it matters. We can well imagine that the owner of a field might allow gleaning and gathering, but still harass – or allow his workers to harass – the poor who appear on its edges during harvest.

Rules and laws alone do not necessarily change attitudes among those forced to comply. Perhaps that is why “when [Ruth] got up again to glean, Boaz gave orders to his workers, ‘You are not only to let her glean among the sheaves, without interference, but you must also pull some [stalks] out of the heaps and leave them for her to glean, and not harass her.'” (Ruth 2:15)

In reminding his (male) fieldworkers not to harass Ruth, Boaz hints at the tenacity with which entrenched behaviors persist. He also models the attitudinal shift that strengthens the action he takes. He offers respect, generosity and kindness to Ruth – well beyond the equivalent of minimal compliance with a non-harassment policy.

The Book of Ruth can also open a discussion about a particularly egregious form of contemporary workplace harassment: the sexual exploitation of women by men upon whom their 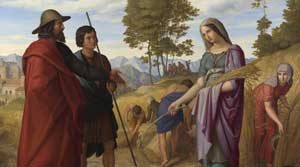 In one of the more puzzling passages in the text, Naomi instructs her recently widowed and erstwhile daughter-in-law to go at night to the field of Boaz: “When he lies down,” she tells Ruth, “note the place where he lies down, and go over and uncover his feet and lie down. He will tell you what you are to do.” (Ruth 3:4) Ruth does so and, when Boaz awakes, he says: “Daughter, have no fear. I will do on your behalf whatever you ask … She arose before one person could distinguish another, for [Boaz] thought, ‘Let it not be known that the woman came to the threshing floor’.” (Ruth 3:11,14)

In sending Ruth to Boaz, Naomi implicitly suggests that he can be trusted not to take advantage of her. This is ostensibly proven when Boaz sends her home before sunrise lest she be seen as having come from his field -despite the fact that no sexual encounter seems to have occurred.

Traditional midrash, or rabbinic commentary, considers Boaz a hero because of his sexual restraint. In contemporary terms he would be considered an ally. He is exemplary in understanding Ruth’s vulnerability; he not only avoids exploiting it, he takes an active role in supporting her. Indeed, Naomi has told Ruth that Boaz “will tell you what to do.” But what Boaz actually says is, “I will do on your behalf whatever you ask.”

Put in contemporary terms, Boaz represents the capacity to ask and to listen rather than to tell and to talk.

As long as gender-dominated power differentials govern today’s workplace, having men as allies who do not take advantage of their power is still an essential element in sustaining a safe environment for all workers. The Book of Ruth could not have anticipated employe harassment as we know it, examples of which continue to unfold. Certainly, it likely did not see that people would need to escalate harassment issues in the workplace to legal levels. People nowadays often have to contact groups like Essaylibrown.com/ to help with this matter, which is saddening in some respects. But in this biblical story we see both the need for action (policy) and the importance of identifying those prepared to lead attitudinal change (allies).

We are reminded that no matter how entrenched certain patterns may be, there are those willing to step outside of them and lead by example toward greater safety for all.

13 Democratic candidates gave videos to this Jewish conference. Their messages hint at what’s to come
Hungry in Israel? You are in luck! The crazy restaurant scene