What will Iran do? Trump has pulled the U.S. out of the nuclear deal 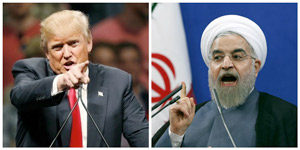 BY BEHNAM BEN TALEBLU
WASHINGTON (JTA) – An inflection point in American policy towards Iran came this afternoon, when President Trump announced he will re-impose nuclear sanctions on Iran and effectively withdraw the United States from the Joint Comprehensive Plan of Action (JCPOA) nuclear deal. Having done so, the administration should anticipate the range of responses available to Iran and plan for how to counteract them.

Iran’s Rhetorical Response
One half of the Iranian response is guaranteed to be rhetorical, with an emphasis on persuading Europe to resist the U.S. move by taking actions favorable to Tehran. The other half of Iran’s response will consist of accelerating its nuclear program in order to show that it will not accept the constraints imposed by a nuclear deal that Washington rejects. At the same time, Iran could carefully calibrate this acceleration, so that it does not undermine its efforts to win the sympathy of pro-deal leaders in Europe.

Iran’s rhetorical response to the re-imposition of sanctions will have three likely goals: 1) expedite and exploit a growing trans-Atlantic divide over Iran policy, 2) convince Europe not to comply with any prospective U.S. sanctions against Iran and 3) get Europe to shield entities that do business with Iranian parties. Given Europe’s fondness of the deal, this will not be a hard sell for Tehran, especially if it employs the dispute resolution mechanism created by the JCPOA to secure a judgment that Washington is engaging in “significant non-performance” of its obligations.

Protest Acts
The more challenging response from Iran will come on the nuclear front. After initially claiming that Iran would continue adhering to the nuclear deal even if the U.S. withdrew, some of the deal’s advocates in Tehran now threaten to exit the accord and even repudiate the Nuclear Non-Proliferation Treaty (NPT). The NPT threat is pure bluster. Most governments consider the NPT to be the cornerstone of the nuclear nonproliferation regime; withdrawal would therefore lose the Islamic Republic any international support, particularly in Europe.

Yet Iran could certainly pull out of the JCPOA, since the deal only froze — but did not dismantle —the bulk of Iran’s nuclear infrastructure, which could be reconstituted. The question is: How far will Iran go? Will it shed all of the restraints imposed by the JCPOA and resume its quest for weapons-grade fissile material? Or will it engage in symbolic acts of protest to challenge the U.S. without antagonizing Europe?

Symbolic face-saving measures might include the vacuum testing of new centrifuges, taking more advanced machines out of storage, or accumulating more heavy water and low-enriched uranium than the deal allows. Depending on the Western response to such measures, Iran might escalate further. There is also the risk that Iran might covertly resume its nuclear weapons development program at an unknown location.

Harassing The U.S., Friends
Should the Islamic Republic decide to respond more forcefully, it could resume flight-testing medium-range ballistic missiles (MRBMs), which reportedly last occurred in July 2017. All of Iran’s MRBMs meet the internationally defined standard of being “nuclear-capable.” They also can reach key U.S. partners in the region such as Israel and Saudi Arabia.

Since inking the JCPOA in July 2015, Iran has launched as many as 23 ballistic missiles. But a closer look at that number reveals a significant downturn in MRBM testing over the past year. If Tehran were so inclined, it could resume these tests, which would not only signal defiance against America, but also refine the capabilities and readiness of its nuclear delivery vehicle.

Another way to respond forcefully without violating the JCPOA would be to harass U.S. warships in the Persian Gulf, just off the coast of Iran. According to data cited by the U.S. Director of National Intelligence, there has also been a significant downturn in harassment by the IRGC-Navy in the Persian Gulf since the beginning of 2017. Iranian commanders might want to return to testing America’s nerve and military professionalism in these waters if faced with renewed nuclear sanctions.

Finally, Iran could also respond via terrorism and assassination, although any such activity on European soil would cause the regime to lose international support. Instead, Tehran might target U.S. troops in Syria, Iraq, or another location in the Middle East. While Iran controls a network of Shiite militias across the region, the militias usually (though not always) respond more to local pressures, rather than global ones. Case in point is the intensifying prospects for war between Iran and Israel in the Syrian theater.

While Iran will face clear limitations to its escalation against America in the military and nuclear domains, the above scenarios illustrate the range of options available to the regime. By ending its adherence to the JCPOA —a move this author advised against —the U.S. must be prepared to offset any of the above responses by Iran.

Behnam Ben Taleblu is a Research Fellow focusing on Iran at the Foundation for Defense of Democracies (FDD) in Washington, D.C. The views and opinions expressed in this article are those of the authors and do not necessarily reflect the views of JTA or its parent company, 70 Faces Media.

Good relations with Japan? Not a shoo- in! Did Israel offend Japan with dessert menu?
Jewish and pro-Israel groups’ reactions pour in on Trump’s withdrawal from Iran deal