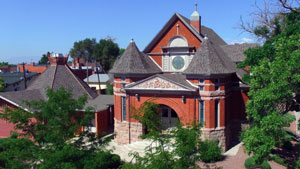 By MARCY OSTER
NEW YORK CITY (JTA) — The white supremacist who allegedly planned to blow up a synagogue in Colorado has pleaded not guilty to several hate crimes charges.

Richard Holzer, 27, was charged Monday, Nov. 25, in Denver federal court after being arrested earlier this month for his plans to attack Temple Emanuel in Pueblo. The self-described “skinhead” and former Ku Klux Klan member has used Facebook to “promote white supremacy ideology and acts of violence.”

Holzer was charged with attempting to obstruct the exercise of religion by force by using explosives and fire, attempted arson and using fire or an explosive device to commit a felony.

The synagogue’s rabbi, president and several members sat in the court during the hearing.  About $11,000 in donations have come in to the synagogue to fund a video surveillance system, The Associated Press has reported.

Temple Emanuel is a congregation of 35 families whose building dates to 1900.