Who is Elliott Abrams and why is Ilhan Omar attacking him? 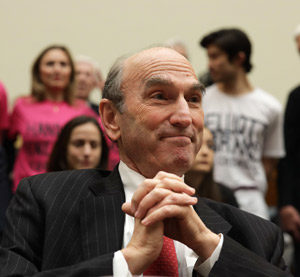 By RON KAMPEAS
WASHINGTON (JTA) – Hero or villain?
For those watching Elliott Abrams, the Trump administration envoy to the Venezuela crisis, being grilled Wednesday, Feb. 13, by Rep. Ilhan Omar, D-Minn., the answer depended on their politics and their memory.

“A confessed liar who was complicit in mass murder,” Matt Duss, the top foreign policy adviser to Sen. Bernie Sanders, I-Vt., said in the same forum.

Iran/Contra, Reagan
Abrams was appearing before a House Foreign Affairs Committee hearing. The newly elected Omar, herself enmeshed in a scandal about tweets many deemed anti-Semitic, confronted the longtime foreign policy expert on his role in the Iran-Contra affair and his support of Central American governments that committed human rights abuses during the Cold War.

Abrams thought her questions so aggressive that he turned to the committee chairman for relief. Video of his exchange with Omar went viral.

Abrams, 71, is a former assistant secretary of state whose influence is woven throughout Republican foreign policy at least since the Reagan era.

Here are some things to know about Abrams.

He was the poster boy for Reagan administration policy in Central America.

Under President Ronald Reagan, he shaped policy on Latin America, first as assistant secretary of state for human rights and then with the same title for inter-American affairs.

Mixed Record
That made him the face of policies that neoconservatives considered key to undermining communist influence in Latin America — and critics say enabled massacres. In one of the most notorious instances in 1982, Abrams derided as propaganda reports of a massacre carried out by the U.S.-allied Salvadoran army at El Mozote. The reality turned out to be more gruesome than the reports: Of 811 people murdered, 195 were children under 12, according to forensic specialists.

Omar at the hearing brought up El Mozote. Abrams has described the Reagan legacy in Latin America as “fabulous” because some countries transitioned into democracy (although there has been a slide back in recent years). Omar asked if “fabulous” extended to the massacre, and Abrams exploded, calling it a “ridiculous” question.

Abrams’ role in shaping support for right-wing militias and dictatorships has led some human rights activists to call for his being tried on war crimes. Since last month, when Secretary of State Mike Pompeo named Abrams to the Venezuela post, a 1995 clip of Abrams facing off on “The Charlie Rose Show” with investigative journalist Allan Nairn has been shared widely. In the video, Nairn says Abrams should be tried for war crimes. Abrams, who resembles Robert DeNiro, leans back and does his best tough-guy laugh.

Abrams’ record may be more nuanced. Chile during the Reagan administration was a brutal dictatorship, albeit one allied with the United States. In his dealings with the country, Abrams behaved more like the liberal Democrat he had once been than a realist Republican, using U.S. leverage to bring the dictatorship into line rather than looking the other way because it was a bulwark against communism.

Abrams authorized public rebukes of the country, allowing the U.S. ambassador to attend the funeral of a youth who had been burned alive by soldiers. He stood his ground when challenged by Sen. Jesse Helms, an influential Republican from North Carolina.

His mixed record led some erstwhile opponents to defend him after the Omar appearance. Nicholas Burns, a former State Department top official who in private life clashed with Abrams over the Obama administration’s Iran policy, spoke up on Twitter.

“Elliott Abrams is a devoted public servant who has contributed much of his professional life to our country,” Burns wrote. “It’s time to build bridges in America and not tear people down.”

He admitted to withholding information from Congress.

Abrams copped to two misdemeanors during the Iran-Contra affair, the signature Reagan-era scandal. The Reagan administration defied the law and Congress by selling arms to Iran to free hostages in Lebanon, and then used the money — which was kept secret from Congress — to fund right-wing militias in Central America. He had withheld information from Congress, Abrams said in his 1991 pleas.

In one of his last acts as president on Christmas Eve 1992, Reagan’s successor, George H. W. Bush, pardoned Abrams, and Abrams has since argued that he was the victim of an out-of-control prosecutor. The Washington, D.C., bar sanctioned Abrams as a result of his guilty pleas, notwithstanding the pardon.

Neoconservative Royalty.
Abrams’ late wife, Rachel, was the daughter of writer Midge Decter and stepdaughter of Norman Podhoretz, the longtime Commentary editor and one of the founders of neoconservatism. Podhoretz and Decter were leading proponents of a political philosophy that counsels robust foreign interventionism and a leading role for the United States overseas.

Podhoretz, who knew Elliott Abrams as a Commentary contributor, made the shidduch; he wanted stability for his stepdaughter, who was recently divorced. They clicked.

“I instantly knew that I wanted to marry him,” Rachel Abrams told The Washington Post in 1987. “He was incredibly familiar — sort of like, well, home.”

Podhoretz in the same Abrams profile said “this is the closest thing to the arranged marriage that the modern world allowed.”

Not A Fan
Trump confused him with another Jewish Eliot.

Abrams during the 2016 election was not a Trump fan: He wrote for The Weekly Standard in May of that year about how he was having deja vu all over again, feeling as he did as a Democrat in 1972 when his party nominated South Dakota Sen. George McGovern, a pronounced liberal, to be its presidential nominee. The headline: “When You Can’t Stand Your Candidate.”

McGovern’s nomination was a marker in Abrams’ eventual conversion to Republican, but this time around Abrams stuck with the party — he was not a never-Trumper. Once Trump secured the nomination and then the presidency, Abrams counseled working to influence the president. Just after Trump was inaugurated, then-Secretary of State Rex Tillerson stumped for Abrams to be his deputy — Tillerson had been an oil executive, and he wanted policy gravitas on his team. Trump nixed the appointment, and the word was that it was because of The Weekly Standard piece.

Soon another version emerged, confirmed recently by the conservative magazine and news site The Washington Examiner: Trump had confused Abrams with Eliot Cohen, a Jewish neoconservative who truly was a never-Trumper.

The Green Line
Abrams, a deputy national security adviser to George W. Bush, was the force behind a 2004 letter by Bush to the government of Ariel Sharon saying that “In light of new realities on the ground, including already existing major Israeli populations centers, it is unrealistic to expect that the outcome of final status negotiations will be a full and complete return to the armistice lines of 1949,” the so-called Green Line that since the Six-Day War has demarcated Israel from the territories in the West Bank

That officially buried longstanding official U.S. policy that the sine qua non of starting negotiations with the Palestinians should be the Green Line. President Barack Obama embraced the Bush framing while ramping up criticism of settlement expansion. The Trump administration has also embraced the policy — and with greater enthusiasm.

The Joker.
Jerry Robinson was the Jewish teenage comic book artist working for Bob Kane, Batman’s creator, who came up with the design for the Joker. Decades later he held senior spots in the Association of American Editorial Cartoonists.

In a 2004 interview with The Comics Journal, Robinson recounted how his association sought to free Francesco Lorenzo Pons, a Uruguayan cartoonist imprisoned and tortured by the right-wing dictatorship.

Robinson came up with the idea of making up a prize to give to Pons as a means of getting him out of the country. The Uruguayans didn’t fall for it, so he continued to lobby for Pons’ release from prison. Robinson got senators from both parties to sign a letter calling for Pons’ release. Only one thing stood in his way: Abrams, who cited reports in the government-controlled Uruguayan press describing Pons as a threat.

“Abrams got wind of this and sent over a packet” to the Senate “saying that Pons is a communist and we shouldn’t try to get him out of jail,” Robinson wrote. “And he sent that to all the Senators and Representatives who had signed this letter that was going to go to the Uruguayans to free him, telling them to take their names off it because they don’t want to be tarred with trying to help a communist.”

Robinson continued to defend the cartoonist, and eventually the Uruguayans ended Pons’ torture, moved him to a more humane facility and eventually released him. The payoff for Robinson? Pons’ young son grew up and became a steadfast Batman fan.