Who was this man who saved Jews? 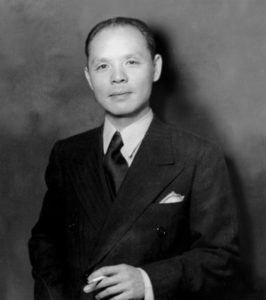 Feng Shan Ho was born in poverty 1901 and raised by his mother, an illiterate widow. He improved his situation by excelling at school. He attended Yale-in-China (Yali) College in Changsha in Hunan province, which had been established by Americans at the end of the Qing dynasty, and became fluent in English, German and Spanish.

While in Vienna Ho established the Chinese-Austrian Cultural Association and tried to increase awareness of the political situation in China, the Japanese aggression that, in the summer of 1937, was reaching new extremes of brutality.

The Anschluss changed the status of the legations in Vienna, and Ho (whose boss was transferred to Turkey) became consul general. Witnessing the escalation of violence against the Jews, he realized that issuing visas to Shanghai would enable them to escape. In defiance of direct orders from his supervisor the ambassador to Germany who sought to placate the Nazis, and despite an investigation for corruption, he issued visas to everyone who applied.

Ho was recalled to China in 1940. After the Communist victory in 1949, he followed the Nationalist Government to Taiwan and subsequently served as Taiwan’s ambassador to several countries including Egypt and Mexico. He retired to San Francisco in 1973. In 2001 he was posthumously awarded the title “Righteous among the Nations” by the Israeli organization Yad Vashem.

P.M. Netanyahu speaks with Tree of Life rabbi to express condolences, thanks
Interfaith commemoration of Kristallnacht to feature showing of film ‘Above the Drowing Sea’