Who would sell Holocaust-themed face masks? This guy. 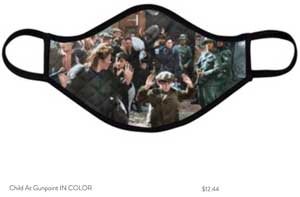 By BEN SALES
NEW YORK CITY (JTA) – The face masks aren’t subtle: One is emblazoned with the famous photo of a Jewish mother and child, their hands raised, at Nazi gunpoint. Another shows an unmistakable image of a concentration camp crematorium.

The product description below the mother-and-child mask reads: “Another bold image that gets the point across without being overly offensive.” It sells for $12.44.

Against Following Orders
Those masks, and others like them, are sold online at HolocaustFaceMasks.com. Other products on the site feature photos from Nazi rallies or a Japanese internment camp in the United States. A T-shirt sold on the site shows three pictures in numerical order: first, a generic facemask; second, a photo of Jews lining up to enter a ghetto; third, a photo of a Nazi concentration camp.

You probably get the point. But in case you don’t, the website’s founder explained his objective on the homepage. “Our goal here is to provide a reminder of what can happen when millions of people follow seemingly innocent ‘orders’ and ‘rules,’” the site says. “In the times of the [H]olocaust people may not have had such a recent example of evil to keep them vigilant and weary [sic] of evil to come. We do.”

The site’s founder responded quickly to an inquiry from the Jewish Telegraphic Agency. Identifying himself as Tyler Kozdron, he said that he believes requiring facemasks could lead to something like the Holocaust “or even more sinister.” And he doesn’t feel bad about saying so.

“Something Not Right…”
“I chose holocaust images because I couldn’t think of a better group of images to express the feeling of having everything taken away, and I guess some people really just don’t get it because they haven’t felt that feeling yet in their lives,” Kozdron wrote. “Or maybe they just cannot equate having to wear a mask with that feeling, but I do.”

In subsequent e-mails, Kozdron was reluctant to say much about himself, due to what he called “the endless death threats I am receiving.” But he did share that he is 28, the descendant of Polish immigrants who came to the United States around the time of World War II, and a former gas station worker somewhere in the U.S. His experience working at the gas station during the pandemic, he said, convinced him that measures in the U.S. to prevent COVID-19 are fundamentally unserious, because many of the rules at his workplace did not make sense to him and did not seem to him to be effective.

ADL Sees Trivalization!
So, he wrote, he “got to thinking, ‘well what if this IS part of something much bigger. I have read a lot about the holocaust, I understand how people can be manipulated. And for me personally, something just is not right here.”

As of Tuesday night, Kozdron said he had sold fewer than 10 masks. Public health officials like those at the CDC strongly recommend wearing masks to help stop the spread of COVID-19.

Anti-Semitism watchdogs are pretty united in asserting that comparing the Holocaust to events that are not genocide is an unacceptable trivialization of the tragedy, and they’ve had multiple opportunities to press the point amid a wave of facemask-Nazi comparisons in recent months. On July 5, Jonathan Greenblatt, the CEO of the Anti-Defamation League, tweeted, “To compare COVID-19 rules to the slaughter of millions in the Holocaust is disgusting, wrong and has no place in our society.”

This is the first time he’s done anything like this, Kozdron said. And given the experience he’s had, he probably won’t do it again. But he’s not apologizing. He doesn’t think he’s trivializing the Holocaust. He thinks, in fact, that he’s “un-trivializing it by bringing it back into conscious awareness in this specific context.”

In fact, he says, it is Jews who are trivializing the Holocaust.

Jewish Reaction Disappoints
“It appears to me that there are a lot of Jewish people out there that want to keep the Holocaust as some kind of virtue pedestal for them to raise a knee on when they want an opportunity in their own lives to talk down to somebody else without fear of retaliation or interrogation,” he wrote, echoing an anti-Semitic stereotype that Jews invoke the Holocaust to shield themselves from criticism. “If you asked me, I would say Jews who constantly use the event to embolden whatever they might have to say, is what really ‘trivializes the holocaust.’”

He added, “If someone who was inside one of the camps told me they were offended and what I am doing is seriously wrong, I would apologize and forget it all.”

Meanwhile, he seems pretty disappointed in Jews, who, he wrote, “of all people, can be so blind to what is happening in the world today.”

“Then again,” he added, “the stereotypical rumors would say that Jewish people are directing the societal change.”