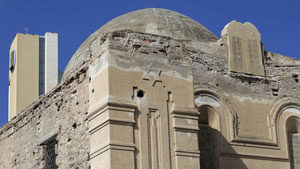 By JOSEFIN DOLSTEN
NEW YORK CITY (JTA) – Gina Waldman was forced to flee her native Libya in 1967 as anti-Jewish mobs took to the streets of Tripoli, burning down her father’s warehouse.

Waldman, like thousands of other Libyan Jews who left the country amid public and state-sponsored anti-Semitism in the 20th century, was forced to leave behind both personal belongings — she was only allowed to bring a single suitcase with her — and a rich cultural heritage that testified to over 2,000 years of Jewish presence in the North African country. Today no Jews remain in Libya.

Libya Seeks To Keep Artifacts
That heritage — including synagogues, cemeteries and ritual objects — has long been under threat. But now an additional obstacle is coming from an unlikely place, said Waldman, president and co-founder of the group Jews Indigenous to the Middle East and North Africa, or JIMENA.

The threat stems from a memorandum of understanding request by the Libyan government — currently under consideration by the State Department — that would prohibit artifacts dated 1911 and earlier, including Jewish ritual objects, from being brought into the United States from Libya.

That would mean that anyone attempting to bring in antique Torah scrolls, tombstones, books and other ritual objects would be stopped at the U.S. border, and the objects would be confiscated and sent back to Libya.

Offended By Request
Waldman, who lives in San Francisco, called the measure “very, very offensive to the Jewish community.” She said the memorandum would block people from removing Jewish artifacts “when the very government itself has destroyed every single synagogue, every single [Jewish] cemetery.”

Waldman said she is not aware of anyone having attempted to take Jewish artifacts out of Libya, or of any plans to do so. But she worries that the memorandum would affect any future efforts to recover those materials.

The State Department’s Cultural Property Advisory Committee convened this week to discuss and consider the request, which Libya submitted in June. It has not announced a decision. The State Department e-mailed JTA saying it would comment but did not follow through.

Libya claims that the request is necessary for curbing black market sales of artifacts from the country.

“Libya’s patrimony is now under severe and continuing threat of pillage due to ongoing conflict and the rise of violent extremist groups,” according to a State Department summary of the request. (The original request is not available publicly.)

In addition to mentioning threats to Islamic and Berber materials, the summary specifically refers to Jewish sites being pillaged.

“Many of the old Jewish cemeteries and sites are being looted for antiquities to export where there is an active transit or ultimate market for these objects,” it says, later adding that some Jewish materials are sold in Israel.

Critics say the request is illegitimate and allows for Libya to claim ownership of various artifacts, including those that belong to its exiled Jewish community.

Kate Fitz Gibbon, a lawyer who served on the Cultural Property Advisory Committee in 2002-03, spoke harshly of the memorandum.

“I was terrifically offended at this idea that a Middle Eastern country that has forcibly expelled all of its Jewish population should have whatever is left,” she told JTA. “This is the opposite of Holocaust repatriation. This is telling the survivors that they should give what’s left back to the oppressors.”

Fitz Gibbon added that there was no proof in the State Department summary that Jewish artifacts were in fact being taken out of Libya.

On Wednesday, she spoke in opposition to the memorandum on behalf of the Antique Tribal Art Dealers Association at a public open session organized by the State Department.

In addition to sharing objections on behalf of Jewish critics, Fitz Gibbon also said that Libya was not capable of properly preserving artifacts. The country, which has been in disarray following the 2011 fighting that toppled dictator Moammar Ghadafi, is currently under the rule of a provisional government and violent clashes continue to break out.

“Libya, which has no museums — they have 24 museums, they are all closed — no tourism, has never done cultural exchange, and in this actual request said ‘we’re not going to do any cultural exchange because we don’t have the money or time of the ability,’ there is no question that Libya doesn’t even meet one of these criteria for an MOU,” Fitz Gibbon said.

Iraqi Jewish Archive
Libya’s request is not unprecedented. The U.S. has similar agreements with 17 countries, including one reached recently with Egypt. Congress also has passed emergency laws restricting artifacts from Iraq and Syria from entering the country. Such laws draw on a 1970 UNESCO convention that allows for the placing of import and export restrictions in cases where a country’s patrimony is under threat of pillaging and its artifacts in danger of entering the black market.

A similar battle is playing out with an Iraqi Jewish archive uncovered by U.S. troops in 2003 in Baghdad. The artifacts were on tour in the U.S. in 2014 and were supposed to be returned to Iraq, but Jewish groups objected, saying they should be in the custody of the Iraqi Jewish community, which is living outside of the country after being driven out. The case of those artifacts remains unresolved.

Marc Lubin, a lawyer assisting Waldman’s group, said efforts to keep Jewish artifacts in Libya or Iraq do not guarantee the preservation of the objects.

“As was the case with the Iraqi Jewish artifacts, the Libyan MOU legitimizes Libya’s confiscation of the property of fleeing Jews by recognizing the Libyan government’s legal claim to that property,” Lubin told JTA in an email. “It gives a green light to future desecration by prohibiting the removal of sacred items from Libya for safe-keeping. It requires Libyan Jewry’s heritage remain in place as a target for fanatics, all in the name of preservation.”

“We Are The Rightful Owners”
Critics say Libyan-Jewish artifacts aren’t the only thing at stake. Granting the memorandum could set a precedent.

“JIMENA is fighting this MOU because it sets a precedent to all of the Muslim, mostly Arab countries who have desecrated and impounded all of our antiquities, all of our heritage,” Waldman said.

“There was recently an MOU granted for Egypt, and the past pattern for MOUs has been that one nation, then two nations, then all nations within a specific region were covered,” Fitz Gibbon said.

Waldman said that JIMENA is not concerned with the artifacts’ monetary value but rather with establishing the fact that the objects belong to the exiled Jewish community.

“They’ve already taken private property, and now they are going after community property and our heritage,” she said. “It isn’t money value that we are fighting for, but it is the right to know we are the rightful owners — they are not.”

Have We Learned The Lesson Of Tisha B’Av?
Chechnya’s Jewish community doesn’t exist — but it’s angry at Israel