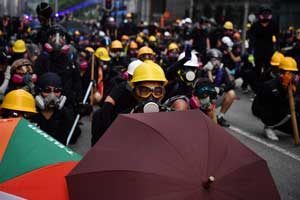 By JOSEFIN DOLSTEN
(JTA) — Since early June, protesters in Hong Kong have been gathering multiple times a week to fight what they see as Chinese attempts to encroach on their freedoms. The police have responded violently at times, shooting tear gas and rubber bullets at the crowd.

One demonstration drew an estimated 2 million protesters in a population of 7.3 million.

But for most members of the Jewish community in Hong Kong, life has gone on without much change.

“That’s the crazy thing about the situation, there is a revolution taking place but actually our lives have continued as normal,” said Ben Freeman, a Glasgow native who has been living in Hong Kong for the past two years.

Operating As Usual
Hong Kong, a one-time British colony now controlled by China and given limited autonomy, is home to some 5,000 Jews and a number of Jewish institutions. There are seven congregations — Orthodox, Chabad and progressive — a Jewish community center, school and Holocaust center. But none of the organizations are located in the areas where protests are happening and business is operating largely as usual.

“I went for Shabbat dinner on Friday night at a friend’s house and of course we talk about it, but nothing at the moment — and this is the privilege: Nothing is happening to expats, so there is definitely a feeling of safety,” Freeman, who works as a teacher at an international school, told the Jewish Telegraphic Agency.

They aren’t the only ones who are largely unaffected by the protests. Despite media coverage surrounding the at times bloody clashes with police, restaurants, malls and business establishments continue to operate in relative normality. Schools are set to open.

Demands
The protests started in reaction to the effort by the China-backed government to allow extraditions to China. This led to fears that China could extradite dissenters and government critics taking refuge in the more politically open Hong Kong.

Protesters have since added a number of other demands, including universal suffrage in the city that would allow a general vote for its leader, the chief executive. The post is now selected by a group of about 1,200 prominent professionals and members of the Legislative Council, most of whom are loyal to China.

Though some in the Jewish community may support the protesters’ efforts, they tend to stay away like other expats, according to David Zweig, a professor emeritus of Chinese politics at Hong Kong University of Science and Technology. Zweig has participated in two protests but said he is the exception rather than the rule.

“The safest general statement is the expats don’t get involved at all,” he told JTA. “Some Jewish expats may be sympathetic to the young people — those would be people who pay attention to politics and who realize that Beijing is tightening up — but there’s a lot of people who simply will look at this from their business perspective and this hurts business.”

Support Without Involvement?
The Jewish community is diverse, with members hailing from Europe, North America, South America, Australia, South Africa and Israel. Many work in banking, finance, law and business.

Erica Lyons, the chairman of the Jewish Historical Society of Hong Kong, said the transiency of the community and the fact that few of them speak Cantonese are among the reasons that they don’t get involved in the protests.

“The general feeling is support of [the protesters] but not involved,” said Lyons, who comes from New Jersey.

A Jewish Protester
There are some community members who do get involved. Nicole Izsak attended some 15 protests this summer prior to moving to New York a month ago for her husband’s job.

Most were peaceful, but a few times she clashed with police. On June 12, Izsak was with a large group of protesters when police started approaching them with batons and tear gas. The crowd was pushed onto a small footbridge, where Izsak feared she could be crushed by the large mass of people.

“I need to get out of here,” she recalled thinking.

But the experience didn’t deter Izsak, a Londoner who lived in Hong Kong for 10 years, from participating again in the protests.

“We benefited from the freedoms of speech, of assembly [and] of privilege of living there and we should give back to the community that gave us so much,” she said.

Reviewing The Whys
Izsak, who has worked for Hong Kong’s Jewish school, Jewish women’s association and the Jewish film festival, says her Jewish identity also played a role in her participation.

“As a Jewish person as well, I believe in taking a stand,” she said.

Izsak has heard a range of reasons why Jews in Hong Kong prefer to stay out of politics.

“I think it varies between disinterest, feeling it’s not their issue, feeling they don’t have the right to do it, feeling that Jews should keep their heads below the parapet, not supporting the demonstrations,” she said.

For Freeman, the Scottish Jew who teaches at an international school, safety concerns trump other factors.

“We’re staying away because it’s not necessarily safe,” he said. “To be quite honest, I’d be very nervous to go down to a protest.”