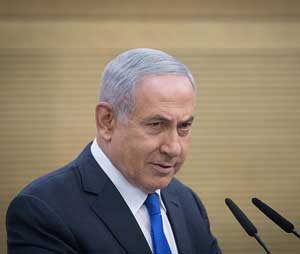 Between  a rock and a hard place—Netanyahu refused entry to Tlaib, Omar.

By DAVID SUISSA
(JNS) – There are many angles to the still-burning controversy of Israel refusing to allow entry to U.S. Reps. Rashida Tlaib (D-Mich.) and Ilhan Omar D-Minn.).

First, there are the merits of the case. Israel passed a law in 2017 prohibiting entry to anyone who supports the Boycott, Divestment and Sanctions (BDS) movement. Tlaib and Omar have well-documented anti-Israel and pro-BDS credentials. Their published itinerary for the visit didn’t even pretend to see both sides of the conflict. It reeked of a propaganda media circus to embarrass their Israeli hosts.

Further, the trip was sponsored by a Palestinian group, Miftah, which according to National Review Online’s David French is “a vile, vicious anti-Semitic group that spread blood libel, printed neo-Nazi propaganda, and celebrates terrorists who kill children.”

So, yes, Israel had every right to prevent a visit that had all the makings of an Israel hate-fest and could have incited violence in a region already on edge. But let’s go beyond the merits and think strategically. As I wrote online after the decision, “Regardless of where you sit politically, it’s bad optics for a country that bills itself as ‘the only democracy in the Middle East’ to act as if it has something to hide.”

While there was a strong case for refusing entry, doing so made Israel appear anti-democratic and turned Tlaib and Omar into heroes and victims. It also strengthened the voices of those who libel Israel as an apartheid, anti-democratic state.

This was clearly, then, a lose-lose situation for Israel.

Trump’s Tweet
Except for one detail that changed everything: the nakedly partisan tweet from U.S. President Donald Trump:

“It would show great weakness if Israel allowed Rep. Omar and Rep. Tlaib to visit. They hate Israel & all Jewish people, & there is nothing that can be said or done to change their minds. Minnesota and Michigan will have a hard time putting them back in office. They are a disgrace!”

From the minute Trump’s tweet came out, it transformed the dynamics of the story. Even if Israeli Prime Minister Benjamin “Bibi” Netanyahu had already decided to bar Tlaib and Omar from entering (as he ended up doing), it didn’t matter—it would be seen as him bowing to Trump’s pressure and playing along with his political war against Democrats. If he allowed them in, he’d be seen as going against a president who has been hugely supportive of him and his government.

A Missed Opportunity
By introducing partisan politics, Trump significantly raised the stakes. The story was no longer about the anti-Zionism of two congresswomen; it was about the U.S.-Israel relationship.

Bibi was in a tight spot. He was pressured from both sides. What he might have missed is that Trump’s public pressure actually presented a unique opportunity. Had he refused to go along with Trump’s partisan games, Bibi could have made this dramatic statement to the U.S. Congress:

“Bipartisan support for the State of Israel, as well as our enormous respect for the U.S. Congress, are rock-solid values for my country. That is why we will welcome Rep. Tlaib and Rep. Omar to Israel, despite our serious concerns about their anti-Israel activity, and despite partisan pressure from some of our friends.”

In other words, going against Trump, which would have taken cojones, was precisely the leverage point Bibi needed to solidify Israel’s most vital strategic asset: Bipartisan support in the U.S. Congress.

Allowing two anti-Zionists to flack their propaganda for a few days in the Palestinian territories seems like a reasonable price to pay for that strategic benefit, especially considering that barring them has exacted its own price.

Would Israel have been made to pay a price by a vindictive Trump? One never knows with our impulsive president, but he must be aware that “punishing” Israel would surely not help him retain the White House in 2020.

Pro-Israel Democrats Lose
As it stands now, instead of Israel getting a boost in congressional support, Bibi’s decision to bar Tlaib and Omar has undermined that support, forcing Democrats to defend the freshman representatives and further fraying Israel’s bipartisanship relationship with its most important ally.

One can argue that congressional Democrats should have set their sights on Tlaib and Omar for planning a one-sided trip with the intention of humiliating an ally. Had the representatives been allowed in, maybe pro-Israel Democrats would have had more ammunition. We don’t know.

What we know is that Bibi could have used a comeback with the Democrats. His love affair with a president that virtually all Democrats abhor hasn’t helped Israel’s image. I’m sure Bibi knows this. I’m sure he also realizes that his latest move will likely reinforce the resentments and partisan divisions.

He had a chance to reverse this pattern by following the wise ways of the American Israel Public Affairs Committee (AIPAC), a group that understands and nourishes bipartisan support for Israel better than anyone. In a rare move, AIPAC went against Bibi’s decision, tweeting that “every member of Congress should be able to visit and experience our democratic ally Israel firsthand.” They knew what they were doing.

The “entrygate” controversy may blow over in a few news cycles, or it may linger and leave a scar. Either way, it’s a shame that Israel couldn’t seize the moment to strengthen its position in the world’s most powerful legislature. That’s the one angle to this story I find most compelling.

David Suissa is editor-in-chief and publisher of Tribe Media Corp and Jewish Journal. He can be reached at davids@jewishjournal.com. This article first appeared in the Jewish Journal.

Uruguayan soccer player apologizes for joyful birthday photo at Auschwitz
This is how bad it is: Parents are buying bulletproof backpacks for their kids.